This will be the second meeting of the two teams this season. Florida captured a tight 59-52 win on January 9 in Gainesville.

Florida head coach Amanda Butler weighed in on playing a team for the second time.

“It’s so tough to face a team in this league for a second time. You’re facing talented coaching,” Butler said. “We have the challenge of playing at Arkansas and that makes it tougher and more important to stay focused on the things that make us successful and hopefully will continue to make us successful.”

The Gators have been playing well as of late, having won three straight after dropping the three games prior. The most recent victory came in a 81-60 win at Ole Miss.

Kayla Lewis put in a solid all-around performance for the Gators in their win over the Rebels. She scored 19 points making 9 of 12 field goals while adding 12 rebounds and three steals.

Sophomore Antoinette Bannister also provided a huge spark for the Gators off the bench. Bannister scored a career-high 18 points, hitting 7 of 13 from the floor, including a 3 for 5 effort from the 3-point arc.

This game will not be easy for the Gators, as Arkansas has been great at home, winning 11 of their 15 contests on their home floor.  To go along with their home dominance, the Razorbacks boast the SEC’s top scoring defense, allowing just 51.5 points per game.

The Gators will continue to lean heavily on senior guard Jaterra Bonds in order to try and pull out the road victory. Bonds has done it all for the Gators this season, leading the team in scoring, assists, made free throws and attempted free throws. She is also second on the team with 35 steals.

Coverage of the game can be heard on ESPN850-WRUF beginning at 7:45.

Amanda Butler on the team’s performance vs Ole Miss

Amanda Butler on the team’s resilience after tough losses

Amanda Butler on a strong performance by Ronni Williams

Amanda Butler on having two point guards at all time

Amanda Butler on the team’s confidence this season

Amanda Butler on the team’s maturity

Amanda Butler talks about “spring-boarding” into the next game

Amanda Butler on the team’s success

Amanda Butler explains how the team has shaped its identity 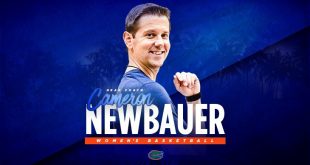 The Gators women’s basketball team has added a graduate transfer to their roster. Emily Sullivan …