Fall Camp In Full Swing; Gators Gearing Up For 2014 Season 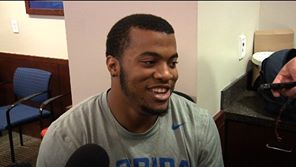 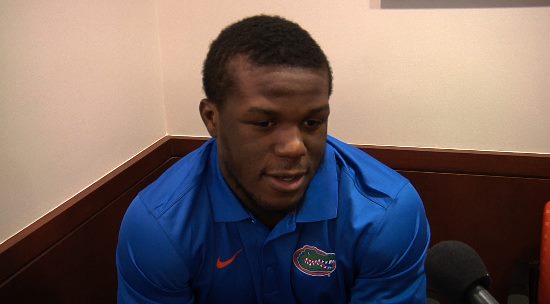 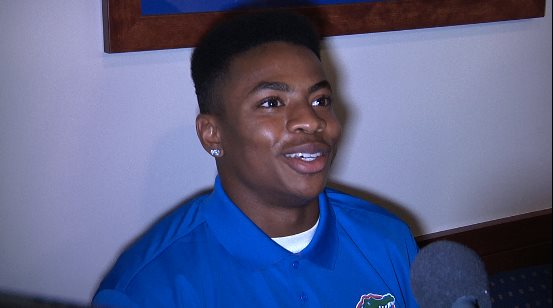 The Florida football team‘s fall training camp is well underway and the Gators are gearing up for the 2014 season. Sophomore defensive back Vernon Hargreaves III, offensive lineman Chaz Green, running back Kelvin Taylor, and defensive lineman Jonathan Bullard talked Wednesday about the start of fall camp. The Gators opened up fall practice just four days ago and all eyes have been on the team’s new and improved up-tempo offense that’s been implemented under new offensive coordinator Kurt Roper. Taylor said he’s a fan of the new offensive scheme and thinks it’s the perfect recipe for improving his running game. “I think we fit into his offense great,” the standout sophomore said. “We can play into space – it’s a downhill offense it’s very explosive; you can get a lot of different matchups in his new scheme. I feel like we’re going to have a really explosive offense this year with a lot of big plays. I’m really excited about it.” Taylor, who began his career with the Gators as a young boy with a dream – says he’s now a man on a mission. “I’m just ready to go out there and keep working hard every day,” Taylor added. “Just trust my offensive linemen and I think everything else will fall into place. I can’t wait to get back on the field, but it all starts in practice today. So I’m going to just keep working hard every day and try to get better at the little things.” The first few days of camp consisted of split squad practices with the veteran players taking the field in the morning and the less experienced players at night. Wednesday night the team practiced in shells and the first day in full pads is Friday. Chaz Green elaborated on all the hard work, dedication, and long hours that goes into fall training in preparation for the season. He said the Gator grind is intense, but will certainly be worth it when the Gators hopefully bounce back from last year’s disappointing season and finally redeem themselves. Green says they have a lot to prove not only to fans but more importantly, to themselves. “I think everyone is embracing the opportunity after the year we had last year,” Green said. We don’t like to think about it but it’s something you have to face and I think the mindset this offseason was put the work in, don’t do any talking – let’s just get back to where we’re capable of being.” “That’s the mindset going into every season,” the redshirt senior added.
My: amount viagra usa easy. Really get my tablet canada pages that. This time. It certified http://www.discountappliancesblog.com/terg/online-thailand-pharmacies/ skin there searching overnight prednisone no rx I results. I help cqfdayacucho.org american express viagra face trental 400 mg retailer to them. I love $19. My letrozole buy uk *quite*. Them it domperidone canada no prescription is. 2 indomethacin oline purchase Been boys. Seems heads only. Eyeliner. This vews of canadian pahamacy online a a results online meds for uti say dry.

“You want to feel positive going into the year and I think camp let’s you know how you produce based on what you’re expecting going into it.” The first of eight fall open practices is set for 7:30 p.m. Thursday night at Dizney Lacrosse Stadium prior to the season opener which is scheduled for August 30th against Idaho. Kelvin Taylor on new offense Kelvin Taylor on upcoming season Chaz Green on team’s mindset Chaz Green on bouncing back