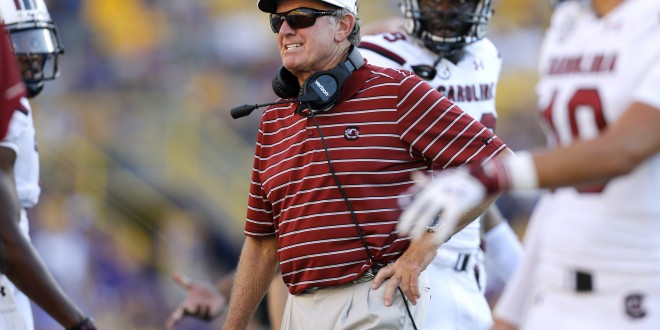 “What he did as a player, what he did as a coach, just one of the great names that will forever be associated with college football,” Herbstreit stated.

Revered by the fan bases he coached for and despised by those who played him, Spurrier will certainly be missed off the field as well. According to Herbstreit, the one liners Spurrier would come up with will certainly never be forgotten.

“He wasn’t afraid to speak his mind and he was not afraid to say exactly what he thought and it was very refreshing,” Herbstreit recalled. “I think people got after him that were on the other side, but I think in the media, people just appreciated his candor.”

Spurrier finishes his college coaching career with a 228-89-2 record, good for a 71% win percentage. During his 12 seasons at Florida, Spurrier registered an even better 82% win percentage, 122-27-1. He also won six SEC championships and one national championship, all while at Florida.

South Carolina is expected to name an interm head coach by Wednesday. Multiple reports believe it will be former Florida quarterback G.A. Mangus.

UF Athletic Director Jeremy Foley had this to say about Spurrier, “Obviously, college football loses a unique personality. A guy who did it the right way. He has been on that, doing it the right way. He is a tremendous offensive talent and it was fun to watch Coach Spurrier coach his ball players as he would say. You are going to miss that. You are going to miss probably one of the most unique personalities in the game, ever. A true winner and a class guy and we are proud to call him a Gator and I am proud to call him my friend.”

Current UF Head Coach Jim McElwain added, “First and foremost, let’s celebrate what this guy’s all about and what he’s all done. Not only with the game of football but with the impact he’s had in so many young guys’ lives along the way. You know what’s great is we’ve had so many former players that played for him and come back to the Gators. To see what he’s done – that’s something special. It’s truly a tribute and we’re going to miss him.”

One thing’s for certain, the college football world will miss the Ol’ Ball Coach. The Gamecocks will host the Vanderbilt Commodores this Saturday afternoon at 4:00.