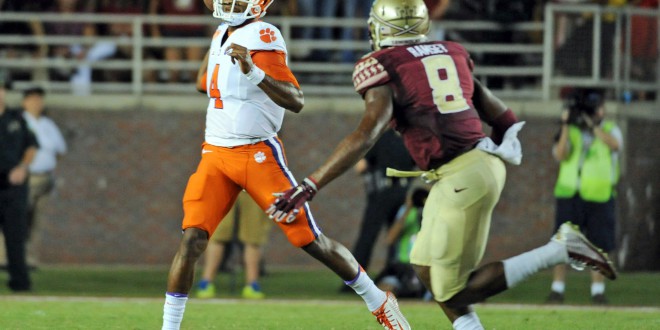 The Clemson Tigers (8-0), recently recognized by the College Football Playoff committee as the no. 1 team in college football, face their toughest of the regular season at home this Saturday against the no. 16 Florida State Seminoles (7-1).

Regarded as the most complete team by many college football analysts, the Tigers could clinch a spot in the ACC championship game with a victory this week for the first time since 2011. In conference play this season the Tigers are outscoring their opponents by 22.4 points per game, recently defeating divisional foe North Carolina State (5-3) on the road 56-41.

Sophomore quarterback Deshaun Watson has been nothing short of spectacular as the Tigers starting quarterback this season. Through eight games Watson has completed 70.3 percent of his passes for 1,936 yards and 20 touchdowns. The potential Heisman candidate has also accumulated 200 yards on the ground and has five rushing touchdowns this season.

Despite the fact that the Tigers have won 17 of their last 18 games and have not lost at home in more than two years, head coach Dabo Swinney recognizes that his team will have to play its best game of the season against a Seminoles team that has owned the Atlantic division for the past three seasons.

The Seminoles have been a major obstacle for the Tigers in recent memory. Since 2008 the Seminoles are 5-2 against the Tigers and have won the last three games in this ACC rivalry.

The last time these two teams played each other in Death Valley, Seminoles quarterback and eventual Heisman trophy winner Jameis Winston tore the Tigers defense to pieces, throwing for 444 yards and accounting for four total touchdowns in a 51-14 blowout. Last season the Seminoles, without Winston, defeated the Tigers in Tallahassee 23-17 in overtime.

Seminoles head coach Jimbo Fisher has acknowledged that Clemson has been a great football team this season, but to him they are no different from other Clemson teams they have played against in the past.

Junior quarterback Sean Maguire, who started in-place of the suspended Winston against the Tigers last season, started his first game of the season last week at home against Syracuse (3-5). Replacing an injured Everett Golson under-center, Maguire completed 65.7 percent of his passes for 348 yards and three touchdowns in a 45-21 victory against the Orange.

While there has yet to be an announcement from Fisher about who the starting quarterback will be for the Seminoles this Saturday, the Seminoles are expecting their star running back Dalvin Cook to return this week after missing last week’s game.

The sophomore running back, in spite of a lingering hamstring injury, has been compared with Leonard Fournette as the best running back in college football, as well as a potential Heisman trophy candidate. In just seven games this season, Cook is averaging 8.2 yards per carry off of 1,037 rushing yards and has accumulated a career-high 11 rushing touchdowns.

A de facto matchup for the ACC Atlantic title, Fisher expects a great game within a tough college football environment.

Kick off in Memorial Stadium is this Saturday at 3:30 p.m. on ABC.

Previous Gators Focused on Vandy, Not East Title
Next #2 LSU and #4 Alabama Face Off in SEC Rivalry with National Ramifications

With less than a month to go, five states will enact name, image and likeness …