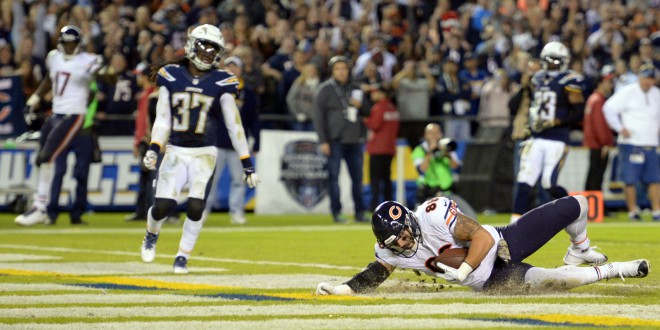 Bears Secure Victory Over Chargers Late In The Game

The Chicago Bears used a clutch late catch by tight end Zach Miller to get a come from behind 22-19 win on the road against the San Diego Chargers on Monday Night Football.

Chicago did not start out well as quarterback Jay Cutler committed a pair of first half turnovers, including a 68-yard pick six interception return by Jason Verrett as the Chargers built an early 13-0 lead.

But the Bears rallied, scoring 15 points in the fourth quarter, and Cutler threw the game winner to Miller, who made a spectacular catch using one hand to nab the Cutler pass with three minutes remaining in the game. Miller says it feels amazing coming out on top after a season in which the Bears have had trouble finishing games.

Chicago’s defense played well late as Lamarr Houston sacked San Diego quarterback Philip Rivers on two occasions and the Bears overcame Cutler’s two turnovers, two missed field goal attempts, and other miscues to improve to 3-5 on the season. The Bears were able to get  the win without two key offensive players in running back Matt Forte and wide receiver Eddie Royal.

Cutler’s two touchdown passes gave him 139 with the Bears to break the franchise record.

Miller credits much of the win to unity of the team and the leadership of Coach John Fox.

This was the fifth straight loss for the Chargers, who are now 2-7 and suffering through their longest losing  streak since 2011.