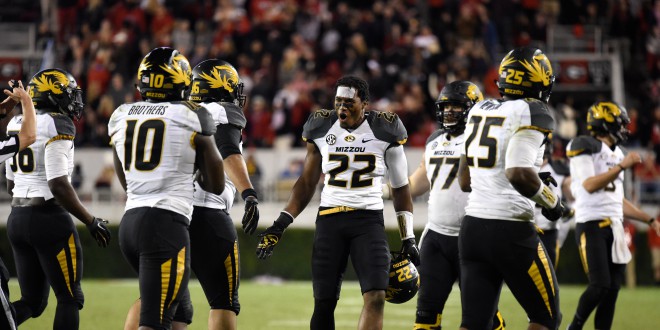 Amid racial tensions that have occurred in the state of Missouri for over a year, a new wave of protest is taking place on the athletic field at the University of Missouri.

Over 40 members of the Missouri football team who are African-American, say they will not participate in team activities until the university’s president, Tom Wolfe, resigns.  The uproar began on the Tiger’s campus last week when a Missouri graduate student, Jonathan Butler, decided to go on a hunger strike until actions were taken by Wolfe over allegations of African American students being verbally abused on campus and that students yelled the N word at members of the Legion of Black Collegians while they were rehearsing for a play.   On a later date, it is alleged that someone rubbed feces in the shape of a swastika on the bathroom wall in a residence hall.

The University of Missouri allegedly dealt with another racial issue back in September when Payton Head, the Missouri Students Association president and an African-American, said he was racially abused while walking on campus. Students began protesting when it took about a week for the university’s chancellor to address the situation.  A number of students, black and white, are outraged with how the university administration has handled these situations.

Payton Head is proud of the stand the football players are taking.

The Missouri campus is located in Columbia, about two hours away from Ferguson, where the shooting of Michael Brown by a white police officer ignited protests and riots.   Tensions have remained high in some areas of the state ever since the shooting.

Missouri football coach Gary Pinkel says the team is united in its stand and practices and team activities were cancelled on Sunday.  Wolfe said he had no plans to resign but did say change is needed on the Missouri campus and that officials are working on a plan for better diversity and tolerance.

"I take full responsibility for the actions that have occurred." – Tim Wolfe in presser announcing resignation. https://t.co/c5jhIiaJba

A senior at the University of Florida reporting on Gator sports, local Gainesville and surrounding area sports, and telling the stories of local athletes. Born and raised in Gainesville, Florida with a passion for telling people's stories and having fun doing it.
@SportsDarwinism
Previous Cross Country Ready for NCAA South Regional Championship
Next Bears Secure Victory Over Chargers Late In The Game