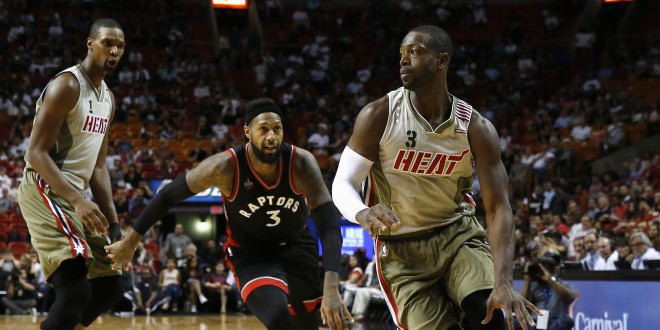 The Miami Heat began their seven-game homestead by defeating the Toronto Raptors on Sunday, 96-76. As Veterans Day approaches this Wednesday, the Heat are sporting military-themed jerseys all week that read “Home Strong” on the chest. This is in collaboration with a program founded by the team to honor soldiers at every game.

The Heat ran the floor against the Raptors, especially in the third quarter when they enjoyed a 30-16 advantage, finishing the quarter with an 18-3 scoring streak. Chris Bosh led the team with 23 points, followed by Hassan Whiteside with 20 points and 11 rebounds.

But it was Dwyane Wade’s 12 points that made history. He passed Bulls legend Scottie Pippen by taking 51st place in the NBA all-time scoring list with 18,942 points in his career.

This was Toronto’s 11th loss in their last 12 trips to Miami and their second loss on the season (which also came from a Florida team: the Magic). Toronto was down a man as forward DeMarre Carroll did not play due to a sore right heel. Their record now stands at 5-2.

Miami was also missing a player as guard Gerald Green sat out to an undisclosed illness. The Heat had no comment on his current status.

Moving forward, Toronto will host New York and Miami will host the LA Lakers, both on Tuesday. The Heat/Lakers game could be the final time Kobe Bryant plays at Miami. Miami comes into the game at 4-3 while the Lakers are 1-5.