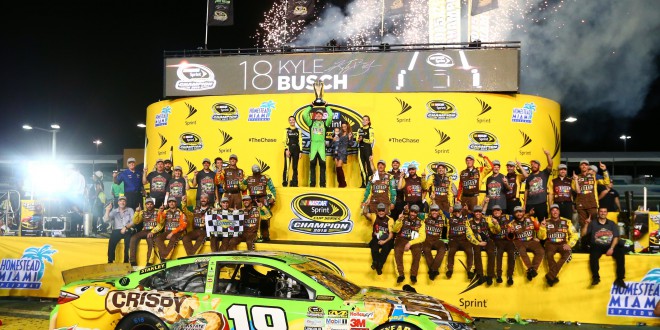 Winning the Sprint Cup Series Championship was a career first for Kyle Busch. He led the pack for 41 laps of the 267-lap race. Busch beat out the other Championship 4 drivers, Kevin Harvick, Jeff Gordon, and Martin Truex Jr., in the Ford Ecoboost 400 in Miami on Sunday to clinch the cup. He says this opportunity is beyond what he could’ve imagined.

But it was certainly a bumpy ride to get to this point. Busch opened up his season with devastating crash during the NASCAR XFINITY Series in Daytona, which left him with a broken right leg and foot. He was out the first 11 points races of the season and finally returned mid-May.

NASCAR decided to grant Busch a waiver to get into the Chase as long as he was able to win a race and make the top 30 in points. Busch got that first win at Sonoma Raceway about a month later.

This title proved to be a family affair as the Busch brothers became the second pair of brothers in NASCAR to win premier series championships. Kyle’s brother Kurt won the championship in 2004.

Sunday’s race was also the last of Jeff Gordon’s impressive career. Although he came up short Sunday by finishing 6th, Gordon left his mark on the track with 93 wins and 4 championships. He says despite Sunday’s outcome, he’s satisfied with his accomplishments.

Gordon is moving on to become a broadcaster and says he looks forward to spending more time with his family.