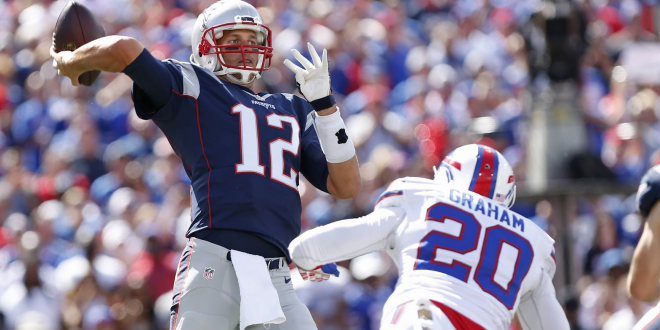 The Buffalo Bills against the New England Patriots in September. Courtesy of USA Today Sports

The Buffalo Bills are looking top the undefeated New England Patriots in a NFC East showdown.

The Bills are coming into this game looking for a three-peat of division victories. Last week, head coach Rex Ryan and the Bills visited his former team, the New York Jets, and earned an emotional win. Quarterback Tyrod Taylor has been accurate the last few weeks with a total of 339 passing yards and no interceptions. Moving the ball on the ground, Running back LeSean McCoy and tight-end Charles Clay has been electric. McCoy has collected 528 rushing yards and Clay has tallied  up 408 receiving yards.

In Buffalo’s previous meeting with the Patriots in September, the Bills were down 39-13 early in the game, but the Bills started to make things interesting with 19 unanswered points in the fourth quarter. Patriots quarterback, Tom Brady threw for 466 yards in this game, making it his second-most of his career. Bills quarterback, Tyrod Taylor started firing back by completing 23 out of 30 attempted passes and three touchdowns, but it was not enough. Patriots defeated the Bills 40-32.

The Patriots quarterback, Tom Brady has a total of 3,043 yards this season and no one has been able to stop him. New England has numerous of players that have contributed to the endless wins, but one of Tom Brady’s hot targets won’t be available for this game. Julian Edelmen is sidelined with a foot injury and the timetable for his return is unclear. Julian has stacked up 692 total yards and seven touchdowns this season.

Ironically, The Buffalo Bills were the last team to hand the New England Patriots a loss. On December 28, 2014 the Bills defeated the Patriots 17-9. On that date, the Bills snapped a 12-game losing streak at Gillette Stadium.

The Bills and Patriots are set to kick-off in a cold Gillete Stadium in Foxborough at 8:30PM tonight.

A senior at the University of Florida reporting on Gator sports, local Gainesville and surrounding area sports, and telling the stories of local athletes. Born and raised in Gainesville, Florida with a passion for telling people's stories and having fun doing it.
@SportsDarwinism
Previous FSU is Ready for a Visit to the Swamp After Dominant Win
Next Overcoming Odds: Kyle Busch Wins Sprint Cup Series Championship