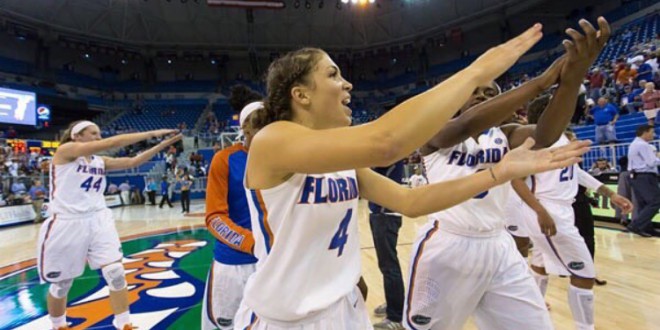 The Florida women’s basketball team continues its recent winning ways as it beats Ball State 85 to 79 Friday in a tournament in Boulder, Colorado.

Senior guard Carlie Needles, a Colorado native, set the tone for the Gators. Needles sent a floater from behind the three-point line and became the first player to put points on the board. Shortly after her first three points, she was found behind the perimeter again and fired one off for another three points. Needles tallied up four 3 pointers in the duration of the game and ended her night with a total of 13 points, 10 assists in front of her hometown family and friends.

The final score is an indicator of how close the Gators and Cardinals kept this game. Both teams turned the ball over and fouls by both teams contributed to some ragged play at times.

The game changer and “warrior” for the Gators was sophomore forward Haley Lorenzen. The 6’3″ Lorenzen dominated inside the paint. She crashed the boards collecting six rebounds that resulted in numerous put backs for the Gators. Haley found her hot spot with a couple of mid-range jumpers and ended her night with a head-turning 2o points.

After junior guard Simone Westbrook, pulled the trigger from behind the perimeter, the ball found the bottom of the net and put Florida within three points at the end of the third quarter, trailing the Cardinals 65-62.

The Gator defense stood tall in the last moments of the game and after a couple of visits to the free-throw line and hard-earned lay-ups, Florida got the win. Butler says they got a win over a great team.

After their first win on the road this season, the Gators are now headed to the championship round of the tournament; tip-off is currently set for 9:30 pm eastern time.

A senior at the University of Florida reporting on Gator sports, local Gainesville and surrounding area sports, and telling the stories of local athletes. Born and raised in Gainesville, Florida with a passion for telling people's stories and having fun doing it.
@SportsDarwinism
Previous PREVIEW: UF Women’s Basketball Team Takes On Ball State
Next Stomped in the Swamp, Noles Win 27-2 in Regular Season Finale