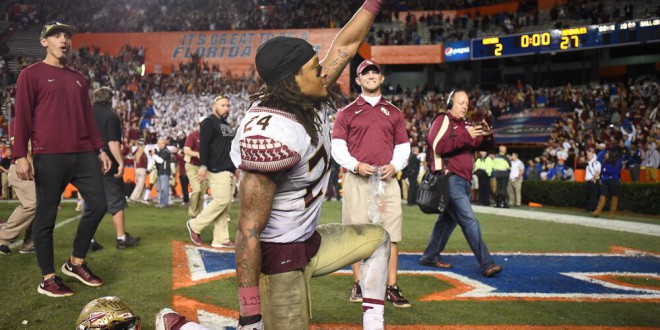 FSU linebacker Terrance Smith (24) cuts grass from the Flordia endzone and holds it up toward the crowd after his team defeats their rivals 27-2. (Greenberry Taylor/ WUFT News)

Stomped in the Swamp, Noles Win 27-2 in Regular Season Finale

The streak lives on for the 13th-ranked Florida State Seminoles (10-2) as they once again come away with a win at Ben Hill Griffin Stadium, beating the Gators 27-2 Saturday in Gainesville. The 12th-ranked Florida Gators (10-2) have not been able to beat the Noles at home since 2009 and now they’ll have to wait two more years before getting another shot.

It was a game that saw the two teams combine for 11 punts and less than 300 yards of total offense after one half of play. The Noles had tallied 124 yards in the first half, but 95 of those came on three chunk plays. Outside of those three plays, the Gators defense limited the FSU offense, featuring the nation’s best yards-per-carry running back, to just .9 yards perplay. Despite that, Florida still found themselves trailing 10-0 at halftime.

The Gators offense was only able to rack up 122 yards of offense during that first half and failed to put points on the board for the second time in as many games. It wasn’t much better in the second half for that unit as Florida finished with 262 total yards, highlighted by a 136 yard rushing performance from junior running back Kelvin Taylor. And, if not for a strip sack by freshman defensive end CeCe Jefferson which caused an FSU safety in the fourth quarter, the Gators would have been shutout for the first time since 1988 and the first time in this series.

Despite the valiant effort by the Florida defense, FSU eventually was able to break through in the second half as sophomore running back Dalvin Cook finished the game with 183 yards rushing and two touchdowns, including the cherry-on-top score with 20 seconds remaining. Senior tight end Jake McGee, who led the Gators with 34 yards receiving in the game, expressed his displeasure with the offense and tipped his hat to the defense.

Sophomore quarterback Treon Harris finished the game 19-for-34 and threw for 134 yards while rushing for negative five yards thanks to four FSU sacks; his passing totals marked the fourth time in five games that Harris didn’t break the 160 yard passing plateau. Florida also struggled mightily in the red zone failing to convert on three trips, with two turnovers on downs and a missed field goal. Gator head coach Jim McElwain was not pleased with the performance by his offense at that end of the field.

This was the first time that a McElwain-led offense failed to score since 2013 when Colorado State lost 13-0 to Utah State.

While McElwain didn’t like the lack of offensive production in FSU territory, he was quick to point out a few bright spots from the game, specifically the effort shown by the team.

It’s not going to get any easier for the Gators as they head to Atlanta next weekend to take on the Alabama Crimson Tide (11-1) in the SEC Championship Ga. McElwain notes that Florida will have their hands full against a very talented Alabama team.

Kickoff between the Gators and Tide will be at 4 pm Saturday afternoon in the Georgia Dome.