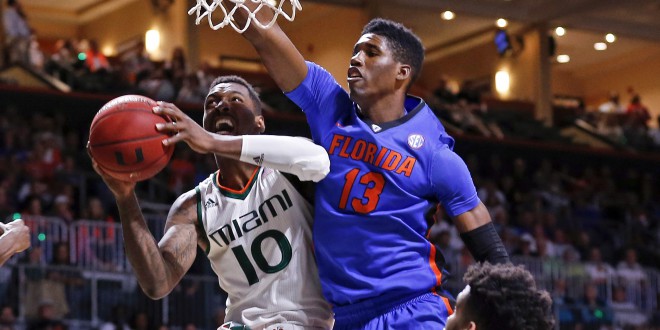 The Miami Hurricanes posted their 24th series win in program history over the Florida Gators Tuesday night after a decisive 66-55 victory in Coral Gables. The Gators came into this game 6-1, fresh off of a 76-56 win over Richmond. Although the Gators came into the game fourth in the nation in rebounding, the Hurricanes out-rebounded the Gators 42-31 and finished the game with two more second chance points. Hurricanes guard Sheldon McClellan, a transfer from Texas, led the way for the Hurricanes posting 24 points on 7-12 shooting, adding five rebounds and an assist as well. Gators center John Egbunu led the Gators in scoring with 14 points on 5-10 shooting, along with five rebounds.

In the first ten minutes of the game, the teams found themselves playing extremely similar, trying to work the ball inside, and if/when unsuccessful, then settling for a 3-point shot. The Gators shot 42% in the first ten minutes while the Hurricanes shot 40%. After Miami guard Sheldon McClellan’s jumper with 11:21 left in the first half, neither team would score until the 6:09 mark, when Miami guard Angel Rodriguez hit a driving, transition layup. The Gators troubles would extend even longer than Miami’s, with John Egbunu finally breaking a six minute and 52 second scoring drought after throwing down a massive dunk from the right block. From the 4:57 mark to the 2:40 mark of the first half, the Gators would go on an 8-2 run, closing the deficit to only one point. The Hurricanes would gain back their momentum going on an 8-0 run to end the first 20 minutes, going into halftime up 33-24. Both teams struggled shooting wise in the first half, with the Gators going 36.0% from the field and 16.7% from downtown and the Canes shooting 38.2% overall and 36.4% from the three point line. Egbunu led the Gators in the first half with 10 points on 4-7 shooting, adding four rebounds as well, while McClellan led the Canes with 12 points and three rebounds. The Gators were outrebounded by the Canes in the first half 25-15.

In the second half, the Gators came out with an aggressive press, trying to slow Miami’s tempo and momentum from the first half. Although the Gators were able to curtail Miami’s roll a bit, they found a hard time getting Egbunu involved in the offense, with his first points of the second half coming with 9:02 left in the contest off of a pair of free throws. Miami’s biggest lead of the game came at the 4:32 mark, when Miami center Tonye Jekiri hit 1-2 free throws to put the Canes up 59-46. Miami would go on to win this contest 66-55 improving their record to 8-1, while Florida dropped to 6-2 on the season, now 0-2 against ranked teams on the year. The Gators last lead of the game came with 16:45 left in the first half, when they found themselves up 6-5 after a powerful slam from John Egbunu. In the second half, Miami outscored the Gators 33-31 and outshot Florida 41.2% to 40.6%.

As a whole, both the Gators and Hurricanes shot 39% from the floor, while Miami edged Florida in free throw percentage 79% to 63%. In a stat the Gators usually excel in, they found themselves trailing in the entire game, as Miami outrebounded Florida 42-31. With decreased rebounding came less second chance points. While the Gators were able to score 24 second chance points vs. Richmond last game, this time, they were only able to put up nine to Miami’s 11. The Gators’ top three scorers in this one were John Egbunu, Dorian Finney-Smith and Devin Robinson. Egbunu put up 14 points on 5-10 shooting, while adding five rebounds, Dorian Finney-Smith posted 12 points and six rebounds, and Devin Robinson scored 11 points, also adding six boards to Florida’s total. For the Hurricanes, Sheldon McClellan led all scorers in this one, shooting 7-12, scoring 24 points and adding five rebounds. Tonye Jekiri was a force to be reckoned with in the post for Miami, posing one of John Egbunu’s first real challenges of the season, putting up nine points on 3-4 shooting and nine rebounds.