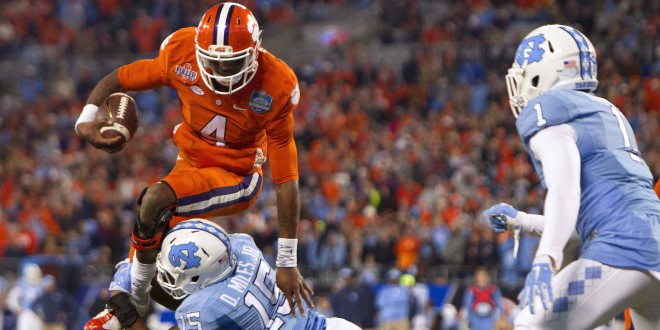 College Football Final Four Have Their Eyes on the National Title

And then there were four.

The Final College Football Playoff rankings were announced on Sunday, setting the match-ups that will determine who makes it to the National Championship.

“I like Clemson, nobody is really giving them a chance,” ESPN analyst Danny Kanell said. “When I look at Clemson, I feel like Dabo Swinney has really impressive wins.”

Clemson is seeking their first national title since 1981, and will look to get to the title game in dramatic fashion in a rematch of their bowl game last year.

That was the Russel Athletic Bowl, where the Tigers devastated the Sooners 40 to 6; however, Oklahoma is 12-6 all time in the Orange Bowl. The Sooners look to claim their first national title since 2000.

Michigan State is currently 5-7 against SEC teams in bowl games, and lost to Alabama in the Capitol One Bowl in 2011 49 to 7.

That was the worst bowl loss in the history of the Michigan State program, and the second-largest bowl win for the Crimson Tide.

The Westgate Las Vegas SuperBook has Alabama as nine-point favorites over Michigan State, and Oklahoma a 2.5-point favorite over Clemson.

The selection committee didn’t have much to debate on Sunday with the top four. Three of the top four teams competed for their conference championships, and all managed to avoid upsets.

Clemson edged a North Carolina team that fought to the very end, narrowly escaping an upset due to a blown offside call on an onside kick that would’ve given the Tar Heels a shot at tying the game late.

“To have it come down to a moment like that, a questionable call…I said it on social media, I think North Carolina fans have a right to be upset about that”, said ESPN Analyst Travis Haney.

Alabama vs. Florida was probably a closer game than the Crimson Tide would have liked at some points, but they were able to pull away at the end, winning their second consecutive SEC Championship.

Michigan State almost fell to Iowa, but came back on a 22 play/nine minute drive that resulted in a game-winning touchdown.

Oklahoma didn’t play Saturday, having already clinched the Big-12 title. They’ll have plenty of time to rest and prepare during what will be a five-week gap between the semifinals and their last game against Oklahoma State.

The semifinal winners will advance to the College Football Playoff National Championship on January 11th, presented by AT&T at the University of Phoenix Stadium in Glendale, Arizona.