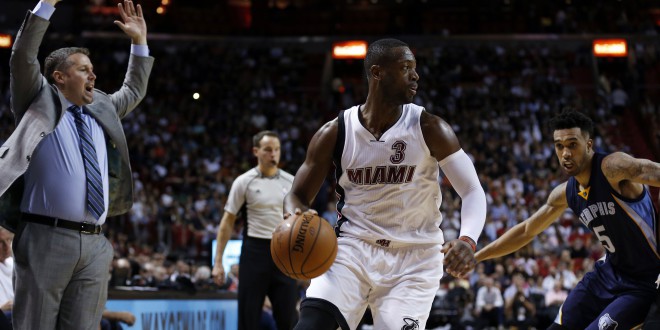 It wasn’t until the fourth quarter that Miami took the lead. In fact, the Heat trailed by 16 points with 4:07 left in the game but battled back to take a 98-97 lead after a Dwyane Wade 19 foot jumper with 21.9 seconds left that gave the Heat its first lead of the game. Wade finished with 14 points, eight of which were in the fourth quarter.

Wade says he felt like he didn’t score much that night until he made his game winning shot.

Chris Bosh shot 7-of-10 from the field to lead Heat scorers with 22 points. Gerald Green added 16, and Luol Deng scored 15 points for Miami.

For Memphis, Jeff Green scored a season-high of 26 points and Matt Barnes chipped in with a double-double with 13 points and 13 rebounds. Grizzlies point guard Mario Chalmers finished with 12 points as he faced Miami as an opponent for the first time since being traded to Memphis last month from the Heat. The loss brought the Grizzlies to 13-12 in their season.