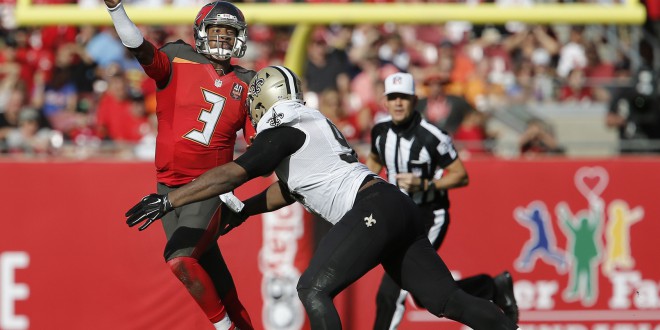 The New Orleans Saints dealt the playoff hopes of the Tampa Bay Bucs a big blow on Sunday with a 24-17 road win over the Buccaneers.  The win avenged an earlier season loss to the Bucs in New Orleans when Tampa Bay won 26-19.

New Orleans quarterback Drew Brees threw a pair of touchdown passes to wide receiver, Marques Colston to give the Saints a 14-0 advantage  early in the second quarter. But, this being the story of the season for the Buccaneers, quarterback Jameis Winston and his offense did not go down without a fight. Tampa Bay’s running back, Doug Martin, showed off his foot work while running for a 14 yard touchdown to make it 14-7. Both NFC South teams ended the half with a field-goal. At the referees whistle, the Saints had a 17-10 lead over the Buccaneers.

With 53 seconds left in the third quarter, Saints running back Tim Hightower was able to run in a touchdown from the three yard line to make it 24-10 New Orleans.  But the Tampa Bay defense stiffened and Winston engineered an 80 yard drive that culminated in a six yard touchdown pass to Adam Humphries. But the Saints held on for the win.

Winton completed 18 of his 32 passes for 182 yards. On the other side of the field, Drew Brees completed 31 of his 41 passes for 312 yards. Brees is now the holder of third place on the career list for touchdown passes in the month of December, passing Dan Marino.

The now 6-7 Bucs will play the 5-8 St.Louis Rams on Thursday night.

A senior at the University of Florida reporting on Gator sports, local Gainesville and surrounding area sports, and telling the stories of local athletes. Born and raised in Gainesville, Florida with a passion for telling people's stories and having fun doing it.
@SportsDarwinism
Previous Heat Top Grizzlies
Next Miami Dolphins to Host Monday Night Football