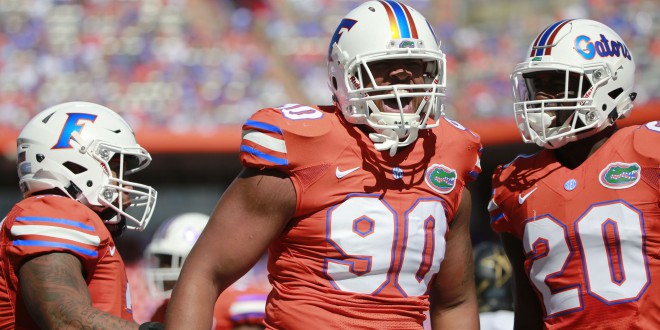 As the Florida Gators prepare to take on the Michigan Wolverines on New Year’s Day in the Buffalo Wild Wings Citrus Bowl, the eyes of many involved with the program remain on the current Gators that could be entering the upcoming NFL Draft.

First team all-American Vernon Hargreaves III said after the SEC Championship game that he’d most likely declare for the NFL once this season has ended. Hargreaves is projected by most to be a first round draft pick, following in the footsteps of past Gator greats Joe Haden (7th overall pick in 2010) and Lito Sheppard (26th overall pick in 2002).

Senior defensive lineman Jonathan Bullard, a third team All-American selection, is also attracting first-round attention. Bullard had 63 total tackles this past season, to go along with 17.5 tackles for a loss. Bullard is a solid example of a player who was draft-eligible last year, returned to school for his senior year, and has now upgraded his draft status.

The remaining Gators that could potentially attempt to make the early jump to the NFL this year are more uncertain.

One player who seems to have made up his mind about returning to the Gators next season is junior linebacker Jarrad Davis. Davis, who is coming off a standout season with 94 total tackles, stated after the SEC championship game that he would not yet enter the NFL draft and plans on returning to the program for his senior year.

Florida coach Jim McElwain has stated that he and the rest of his staff will do everything they can to help the players make the best decision possible for their future.

The deadline for college underclassmen to declare eligibility for the NFL Draft is January 15th, with a 72-hour window available to players that allows them to change their minds and return to school should they choose to declare.