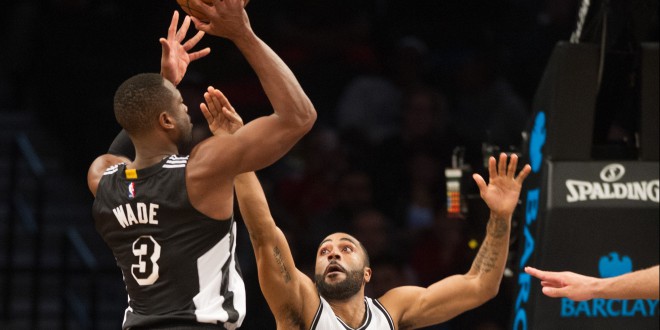 Dwayne Wade was not feeling well heading into the game against Brooklyn, but he was feeling “it.”

The Heat captured their 11th out of the last 13 meetings on the road against the Nets, who didn’t make it easy.

Brooklyn was led by Brook Lopez with 25 points and Jarrett Jack with 22 points and 10 assists. The Nets made their first five shots and took an early 30-22 lead in the first quarter. Miami began to settle down offensively and defensively holding the Nets to only 20 points in the second quarter and responding with 33 points of their own to take a 55-50 halftime lead.

The Nets narrowed the Heat’s lead to just one point with a three point play from Donald Sloan with 7:31 left on the clock, but it wouldn’t be quite enough to stop the red hot Heat.

Miami helped seal its fifth straight win over Brooklyn after going on an 11-2 run, topped off with yet another Wade basket with nearly four minutes left in the fourth quarter.

Wade scored 10 of his 28 points in the fourth quarter with help throughout the night from Hassan Whiteside, who scored 20 points and grabbed 13 rebounds of his own.

The Nets managed to narrow the Heat’s lead to 101-98 with 1:01 left in the game with three free throws from Jack. Another basket from Wade and a preceding missed layup from Thaddeus Young would be the final nail in the coffin for Brooklyn.

The Nets lost the final three games of their six-game homestand and now search for a win on the road against Indiana on Friday.

Miami will return home in hopes of building upon their three game win streak when they host Toronto on Friday.

Previous Gator Legend Abby Wambach Says Farewell to Soccer
Next Gator’s Take a Week Off the Hardwood to Hit the Books.