ORLANDO, FL– The 19th ranked Florida Gator football team (10-4, 7-2 SEC) suffered its worst loss of the season Friday as the 14th ranked Michigan Wolverines (10-3, 6-2 Big Ten) pound Florida 41-7 in the Buffalo Wild Wings Citrus Bowl in Orlando. With the loss, the Gators end the season on a three game losing streak, having lost to Florida State and Alabama prior to bowl season.

In a match up that featured two of the statistically best defensive units in the country, both teams struggled to stop the other in the first half. Michigan racked up just over 230 total yards, 117 of which came on the ground, while Florida rolled to just shy of 250, with 148 coming through the air. Despite out gaining the Wolverines, the Gators found themselves trailing 17-7 at halftime.

In the second half it was much of the same for Michigan. The duo of junior running back De’Veon Smith and senior Drake Johnson combined for 167 rushing yards and two touchdowns. The Wolverines racked up 225 yards rushing overall, the second game in a row the Gators have allowed over 200 yards rushing. Florida head coach Jim McElwain attributed the poor defensive performance to Michigan dominating the line of scrimmage.

Michigan senior quarterback Jake Rudock benefited greatly from the rushing attack, finishing the day 20-of-31 passing for 278 yards and three touchdowns; his performance garnered him Citrus Bowl MVP honors. The Michigan offense rolled to 503 total offensive yards, the most given up by the Florida defense this season. Sophomore defensive back Jalen Tabor discussed the issues the Wolverines caused for the Gator defense.

Quarterback Treon Harris finished the game 8-for-21 with 146 yards through the air and one interception. He did not complete a single pass in the second half. Junior running back Kelvin Taylor was only able to manage 50 yards rushing, although he did eclipse the 1,000-yard mark on the season. Despite the good first half, McElwain expressed his discontent with Harris and the offense as a whole in the second half.

With the season now over, the Gators will have a few days off before resuming football activities on January 5th. Florida will also wait to hear from a few underclassmen on their draft intentions including both starting safeties, Keanu Neal and Marcus Maye.

The coaching staff will resume recruiting once the dead period ends on January 15th leading up to National Signing Day on February 3rd. McElwain looks forward to moving in to the off season and expects a strong finish in recruiting.

As for these two teams, Florida will have to wait until the season opener in 2017, barring a post season match up next year, to face Michigan again. The Gators and Wolverines will open the 2017 season in Arlington, Texas at AT&T Stadium.

22 years old from Pensacola, FL. Telecommunications major at the University of Florida with a focus on Sports News, also pursuing a minor in Communication Studies.
@yancey_dewayne
Previous Falcons Prove They are Alive with a Win Against the Jags
Next Florida Men’s Hoops Wins SEC Opener Over Georgia 77-63 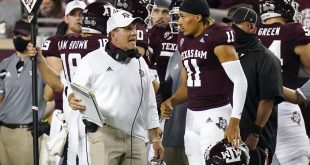 With playoff hopes up in the air, Texas A&M remains uncertain of their postseason chances. The …