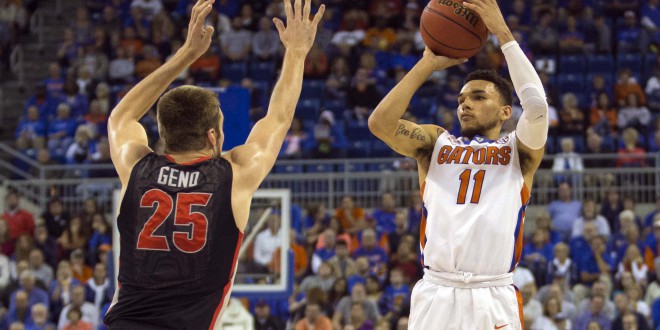 On Saturday night, in a game featuring both men’s basketball teams ranked among the bottom of the SEC in points per game, a defensive battle was expected, but one team would defy the odds. That team was Florida, (8-4) as they would go on to beat the Georgia Bulldogs (7-4), 77-63 in the O’Connell Center in the SEC opener for both teams.

UF has now won its last 13 home games against Georgia, with the Bulldogs last winning at the O’Connell Center in 2002. Freshman KeVaughn Allen led Florida in scoring with 18 points on 5 of 11 shooting, including 3 of 6 from downtown. John Egbunu also recorded his third double-double of the season with 12 points and 12 rebounds. Devin Robinson would also contribute a solid 13 points before leaving the game with a chest contusion in the second half. Robinson’s status for Wednesday’s game against Tennessee is uncertain.

Egbunu helped the Gators start off the game with momentum, powering down two ferocious dunks for Florida’s first four points. Afterwards, a quick string of three 3 pointers would give Florida a 13-6 lead at the first television timeout. The Gators came into the game ranked dead last in the SEC in three point shooting, knocking down only 27.4% of their shots from downtown. Although the Bulldogs would go on a 5-0 run to cut the Gators lead to only two with 11:38 left in the half, an 11-0 run by the Gators would follow, putting them up 24-11 with 8:50 left in the first 20 minutes. That run would include two of John Egbunu’s four first half dunks, and a Devin Robinson three pointer. Florida would take its biggest lead of the first half after a pair of free throws from Robinson at 36-20 with 4:12 left. An 11-2 run by Georgia to end the half would cut Florida’s lead 38-31 at halftime.

Florida was able to score effectively in the first half, shooting above their season averages in field goal percentage, three-point percentage and free throw percentage. The Gators shot 44.0% from the floor, averaging 42.2% on the season, while also converting on 46.2% of their shots from downtown, above their 27.4% average and would go 10-15 from the charity stripe, good for 66.7%, well above their 62.7% average on the season. Georgia’s downfall in the first half was their low average from the field, going 42.9% from the floor, along with their inability to convert from beyond the three-point line, shooting 0 of 4.  The Gators also out rebounded the Bulldogs in the first half, 19-16.

Leading Florida in scoring through the first 20 minutes was Devin Robinson, who finished the first half with 13 points on 3 of 3 shooting from the floor, including two 3 pointers while also going 5 of 6 from the foul line. Georgia’s leading scorer in the first half would be Yante Maten, who scored nine points while pulling down five boards.

Georgia started off the second half hot, cutting Florida’s lead to only four with 15:46 remaining in the game. While the Bulldogs’ shooting was hot to start, their defense wouldn’t match the pace. Georgia would pick up its seventh team foul with 13:06 left, putting the Gators in the bonus for the rest of the game. Just over two minutes later, Georgia picked up its 10th foul, putting the Gators in the double bonus category.  The remainder of the game would be smooth sailing for Florida, as they would outscore Georgia in the second half, 39-32 en route to the win.

The Gators finished the game with five different players scoring in double digits including Allen’s 18 and Robinson’s 13.  John Egbunu (12), Chris Chiozza (11) and Kasey Hill (10) also hit the double figure mark.  Egbunu led the team with 12 rebounds while Chiozza led with six assists. Florida shot 42.3% from the floor while Georgia hit just 35.6%, and from three-point range, the Gators shot 40.9% compared to 16.7% for the Bulldogs.  On the boards, the Gators rank first in the SEC, and that showed tonight with UF out rebounding UGA, 43-36.