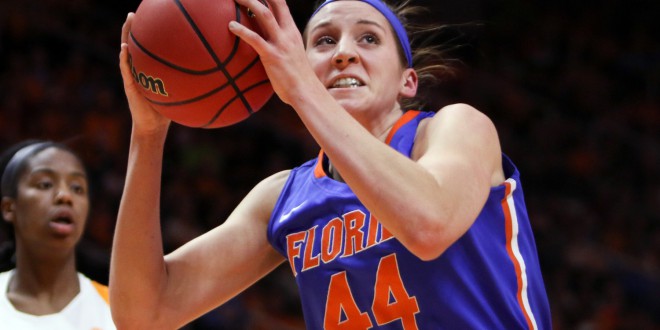 The Volunteers had lingering bragging rights that date back to 2006. The Gators haven’t been able to defeat their SEC East rival, in Knoxville, since February 26th, 2006. In 2009, Florida finally got a victory over Tennessee, but on their home court, in Gainesville, Fl. If that wasn’t enough motivation, Florida’s head coach, Amanda Butler, was not able to coach in her home state, on Tennessee’s sidelines, due to an extreme family emergency. You could see the hunger in the Gators’ eyes.

Florida’s assistant coach, Shimmy Gray-Miller, stepped in as head coach for the night, with the absence of Amanda Butler.

At the whistle, Florida got off to a hot start with Eleanna Christinaki driving in and scoring off of a lay-up, after two seconds of play. January Miller knocked one down from behind three-point line to give the Gators an early 5-0 lead over the Volunteers. Then, the Volunteers welcomed Florida to Tennessee by quickly regaining the lead and going on a 11-0 run. The Gators seemed cold as the Volunteers went for scoring run and increased their lead to 20-9. Florida depended on its defense and the Gator from Greece, Christinaki, to show relevancy by ending the first quarter trailing 25-16.

Statistically by the end of the first quarter, Tennessee capitalized on nine Gator turnovers which turned into 11 Volunteer points.

The second quarter rolled around and the Volunteers shot 11.8 percent from the floor and the Gators dominated rebounds. With Carlie Needles launching from behind the perimeter and Florida showing off shoot accuracy, the Gators started to make a run for it. However, the Volunteers showed why they had a 48-3 all-time series lead over the Gators. At the buzzer for halftime, Florida trailed Tennessee 35-29.

Tennessee’s Diamond DeShields and Andraya Carter had a combined total of points, but it wasn’t enough to stop the Gators’ chomp. Florida executed on lay-ups from Tyshara Fleming, Haley Lorenzen, and Carla Batchelor to close on Tennessee’s lead. Back-to-back three pointers from Carlie Needles and Brooke Copeland resulted in the Gators taking the lead at the end of the third quarter, 53-51.

Even with adversity building up on the Gators’ backs, it didn’t stop them from creating a fourth quarter that was one for the books.

Three Gators hit shots from mid-range to allow Florida to go on a 7-0 run within a 49 second span to start the fourth quarter. Florida and Tennessee continued to trade baskets to keep everyone on their toes. But, with the Gators playing with emotion and wearing their on heart on their sleeveless jerseys, mission accomplished and upset complete.

Assistant coach, Shimmy Gray-Miller while very emotional says that the game plan was to be tough.

With this senior class on the verge of doing what no other Gator women’s basketball senior class has done, Gray-Miller also believes that this could be a turning point for the team.

What an SEC road debut for rookie!!! #GoGators pic.twitter.com/FYPYnxRMQ6

15 games into the season, the Gators are sitting at a 13-2 record and have already matched their victory total from last season when they went 13-17.

Florida hits the road once again to face to Ole Miss on Sunday. Tip-Off is set for 2:00 p.m. and coverage of the game can be heard here starting at 1:45 p.m.

A senior at the University of Florida reporting on Gator sports, local Gainesville and surrounding area sports, and telling the stories of local athletes. Born and raised in Gainesville, Florida with a passion for telling people's stories and having fun doing it.
@SportsDarwinism
Previous Gators Gymnastics Begins National Championship Defense, Jenny Rowland Coaching Tenure
Next NFL Playoff Preview: Washington vs. Green Bay