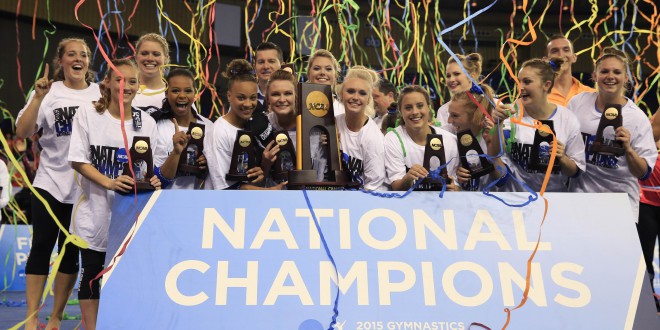 All good things must come to an end.

Following 13 seasons under the leadership of former Florida gymnastics head coach Rhonda Faehn, Faehn has moved on to become the Senior Vice President of USA Gymnastics. The Gators have moved on to new leader Jenny Rowland, but the program’s focus is still the same—defend the national championship again.

Florida travels to the Lone Star State to take on Texas University in the season opening meet Friday night, the first stop on a four month journey to a potential fourth consecutive national title.

Despite the transition at head coach and the 2015 graduations of Kytra Hunter, Jamie Shisler, Rachel Spicer and Kiersten Wang, Rowland says that the Gators have adjusted well to the sweeping changes.

Several key gymnasts from previous championship teams return for 2016. Bridgette Caquatto, Bianca Dancose-Giambattisto, Morgan Frazier and Bridget Sloan are back to finish off their college careers in orange and blue.

The last regular season meet for Florida was Senior Night at the O’Dome against TWU. Sloan’s 10.0 on the uneven bars earned her the honor as the only gymnast in Florida history to score a perfect 10.0 on each apparatus. Sloan is one of five All-Americans on the UF roster.

While she was an assistant coach at Auburn, Rowland says she followed the Gators closely and was aware of their exceptional talent prior to signing on with the program.

The expectations are higher at Florida than anywhere else in the country. Last year’s 197.90-193.40 victory over TWU would imply that the Pioneers pale in comparison to the next four foes on the schedule (UCLA, Auburn, Alabama and Georgia), all of whom are ranked in the top ten. However, the crucial stretch of meets capping off January isn’t putting any extra pressure on Rowland, who feels the most important thing at this stage of the year is gradual improvement.

The 2015 NCAA Championships in Fort Worth is the only other time in the 44 year history of UF’s gymnastics program that the Gators have participated in an event in Texas.