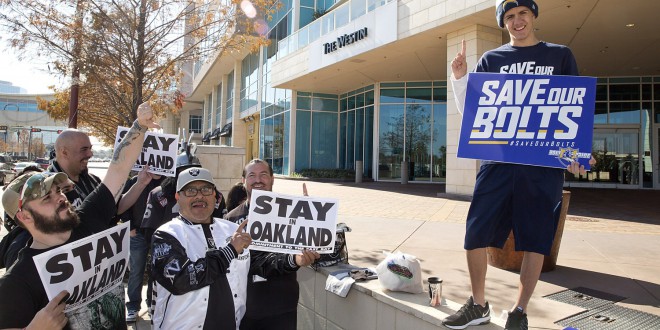 One thing is for sure, the Rams will be returning to Los Angeles.

That being said, the temporary home for the Rams (University of Southern California Memorial Coliseum), is willing to host two teams in 2016. The Rams could be joined by the San Diego Chargers who now have a one-year option to relocate and follow the Rams to Inglewood. The Chargers have until the end of the owners meetings (March 20-23) to decide if they will take the Rams’ offer or stay in San Diego for 2016 and work out a deal in LA later on. However, the city of San Diego is administering a vote in June concerning $350 million in public funding going toward a new stadium that would replace Qualcomm Stadium, so what the Chargers will choose to do is still very much up in the air.

If the Chargers decline the one year relocation option then the next in line to join the Rams in LA is the Oakland Raiders. According to NFL.com the Raiders withdrew their application for relocation yesterday and hope in working with the league that they will find a new home soon. Raider’s owner Mark Davis attempted to reassure Raider Nation not to feel bad and that management is working tirelessly to find the team a home.

The NFL and commissioner Goodell seemed to be thrilled to bring a team back to Los Angeles after 21 years. Goodell announced the relocation of the Rams and the future plans for their new stadium in Inglewood. Commissioner Goodell also announced late last night in a news conference that the NFL will provide $100 million to the Chargers and Raiders if they choose not to relocate.

The final option for the teams is the Raider-Charger joint venture to share a new stadium in Carson, California. However for this to be possible the teams would need 24 of the league’s 32 owners to approve the venture.