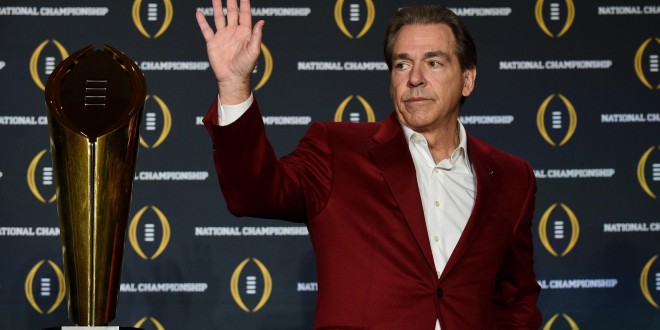 The Future of Nick Saban

Four National Championships in seven years. Eight consecutive seasons where the Crimson Tide have been ranked number one in the country at some point during the year. I guess you could say it has been a great run for Nick Saban and Alabama. But now as he continues to run the machine that is the football team in Tuscaloosa the questions are starting to get asked, how long will the pistons continue to pump for Saban?

Following the win on Monday night against Clemson, coach Saban seemed pretty excited about the future and moving forward with his program.

But time will always be a factor in the grind of college football. At age 64 it is hard to imagine that Saban could coach too much longer. Some may even think that the man who he just defeated Dabo Swinney of Clemson may be his soon successor. Dabo of course, from the state of Alabama once played on the Crimson Tide football team. But that is a crystal ball that we can’t peer into just yet.

Saban is focused on recruiting and getting his players ready for the NFL draft. As for Saban and the NFL, I think we have seen the end of that saga. He tested the waters and even in Miami it was not warm enough for him to take a swim.

He is ready and focused on getting his players prepared for September 3rd, 2016 when his team takes on the Trojans of USC in AT&T Stadium in Dallas, Tx. Retirement and the NFL, its has been pushed to the back of Saban’s agenda. That is for now anyways.