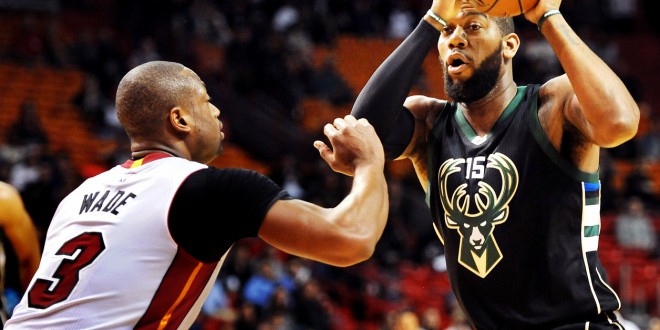 After a six-game road trip that consisted of only two wins, the Miami Heat (23-19) returned home Tuesday night with the hope of adding another win to their string of recent losses.

Just like the final score of the game, the Heat trailed the Bucks halfway through the second quarter onward. By the end of the third quarter the Bucks led the Heat by 18 points and closed the game from there.

The Bucks shot 87.5% from the free-throw line, missing only two out of their 16 shots. Guard Khris Middleton led Milwaukee with 22 points along with center Greg Monroe who added on  15-points and ten rebounds.

Although the Bucks had 17 turnovers Tuesday night, it was not enough for the beaten down Heat to pull off a win.

The Heat were also missing forward-center Chris Andersen and forward Josh McRoberts, who were both out with knee injuries. Suffering from shoulder pain, Dwyane Wade played Tuesday night for 21-minutes, recording only two points.

Forward Chris Bosh led Miami with 23-points and center Hassan Whiteside contributed 23-points of his own along with 18 rebounds.

Both players combined points made for more than half of their final score, but Bosh says the Heat just did not play well offensively or defensively.

Up next, the Miami Heat will take on the Washington Wizards (19-21) in D.C. Wednesday night. This will be the Heat’s first stop in their five-game road trip over the next two weeks.

The Heat return to Miami on the 31st of January where they will face the Atlanta Hawks (25-17).