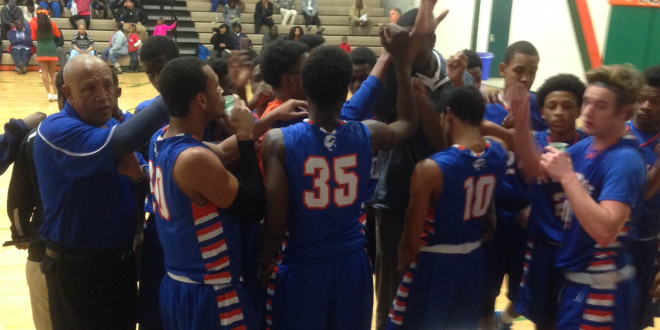 The PK Yonge Blue Wave relied on a balanced team effort last night to win 49-35 on the road against Eastside.

After an impressive defensive showing against the Rams (9-8), the PK Yonge Blue Wave are now 16-3. Sporting an impressive 6-0 record in district matchups, the Blue Wave remain the top team in the 3A District 3 Basketball standings.

Despite a respectable effort from the Eastside Rams, PK Yonge forced multiple turnovers and capitalized on fast breaks to maintain their lead throughout the game.

Entering halftime with a 25-13 lead, Blue Wave head coach Billy Blackmon told his team to ignore the score and work hard to finish the game.

The Rams battled hard in the third quarter, unwilling to be dominated at home. Eastside eventually went on a run of their own, bringing the score to 33-25.

In the start of the fourth, Coach Blackmon brought his starters back in and let the defense speak for itself. The Blue Wave racked up several defensive boards, earned a few steals, and utilized free throws to pull away from Eastside.

Coach Blackmon explained that his team takes pride in their defensive pressure, and holding an opponent to a low score helps their chances of winning. After each turnover, the Blue Wave pressured Eastside and scored on several fast break opportunities.

Along with their strong defense, PK Yonge saw an impressive performance from freshman Byron Smith, who posted ten points and seven rebounds.

Blackmon says containing Rudy Bibb-Boyd is the key to stopping GHS this week.