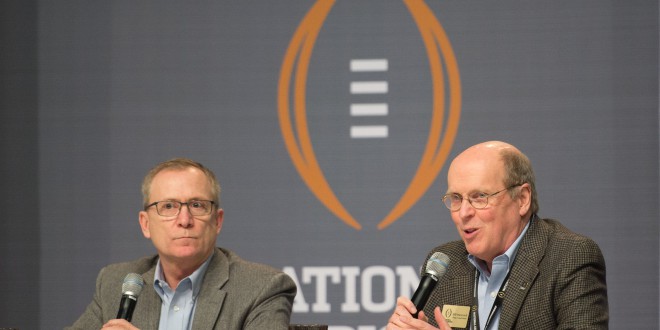 Lloyd Carr, Rob Mullens, Herb Deromedi, and Jeff Bower were appointed to the 13-member council that decides the most worthy teams to make up college football’s final four.

Bill Hancock, College Football Playoffs’ executive director, explains how dedicated the members of the committee are.

The group added some much-needed mid-major members, as Deromedi coached Central Michigan for 15 years, and Bower led Southern Mississippi for from 1990-2007.

The most notable name of the bunch may be Lloyd Carr, who was inducted into Michigan’s Athletic Hall of Honor in 2015. Carr was the head coach of the Wolverines for 12 years, and won six bowl games (most in school history).

When looking at the selections, not too many people have complained about who got in this past season, but more when the games were. After an extremely successful inaugural playoff, named Sports Event of the Year by SportsBusiness Journal, the final four was moved to New Years Eve.

The New Year games drew absurd ratings, 15.5 and 15.3, highest ever for a non-national championship. However, this past semifinals, held on New Years Eve, fielded 9.1 and 9.6 overnight ratings.

Despite the viewer drop, Hancock remains steadfast that the semifinal games will be on New Years Eve.

Optimistically for Hancock and company, New Years Eve 2016 takes place on a Saturday, which may bump back up TV numbers. And as he says in the soundbite, the plan is to move the game back to New Years Day the fourth year of the playoff.