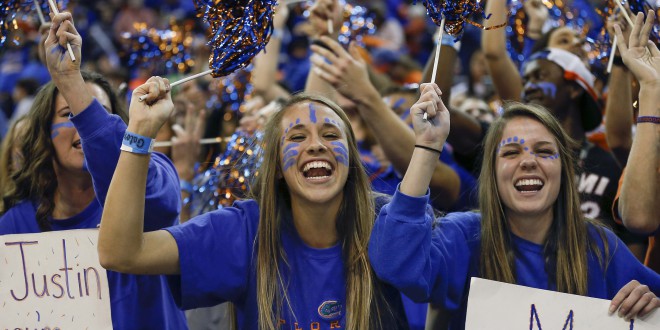 The Florida Gators (13-7) men’s basketball team will have their last chance to impress the committee with a tough out-of-conference win on Saturday afternoon, when they take on the ninth-ranked West Virginia Mountaineers (17-3). A team affectionately known to some as “Press Virginia” boasts one of the most aggressive and efficient defenses in the nation, ranking 21st in team defense, and allowing an average of only 63.6 points per game. Although WVU forward Jonathan Holton has been suspended indefinitely for violating team rules, the Mountaineers depth has allowed them to overcome much of the diversity they’ve faced so far this season.

While the Gators rank ninth in the country in rebounding, with Dorian Finney-Smith averaging a team-leading 8.3 rebounds per game to go along with his 14.4 points per game, the Mountaineers pride themselves on not only their great rebounding ability, but their astonishing success on the offensive boards. West Virginia ranks 32nd in the country with 40.7 rebounds per game, but holds the second spot in the nation in offensive rebounding with 16.7 per game, showing off a 43.1 offensive rebounding percentage. Unfortunately for WVU, the Mountaineers lose the 10th best offensive rebounder in the country with Jonathan Holton suspended indefinitely. On Saturday, look for forward Devin Williams to lead the attack, as the junior is leading the team in total boards, averaging 8.2 rebounds per game. Despite his success on the season, Williams has struggled in his last three games grabbing more than four rebounds only once in that span.

The Mountaineers defense ranks sixth in opponent-to-self turnover ratio with a +5.3 average margin on the season. West Virginia loves to run in transition, and has found success doing so, forcing 10.8 steals per game, good enough for second in the nation. WVU’s swarming press is led by sophomore guard Jevon Carter, who’s averaging a stellar 1.9 steals per game this year.

Florida’s backcourt will be in for a long day of work with Senior Jaysean Paige leading the guard attack for the Mountaineers. Paige has scored 18 points in three out of West Virginia’s last five games with 13 total steals in that span as well. While the team only shoots 30.7 percent from beyond the arc, Paige has been efficient from downtown this season, averaging 36.6 percent from three-point range. Only three Mountaineers playing an average of 20 minutes or more shoot above 30 percent from three (Jaysean Paige, Jevon Carter and Tarik Phillip).

West Virginia has not only succeeded as a whole on the season, but against good teams as well. The Mountaineers are 9-3 vs. the top 100 teams in the nation, and are winning games on the road this year, with a 4-1 record away from home. WVU ranks 17th in RPI, with the Gator sitting just eight slots below them at the 25th slot. While West Virginia plays in a very competitive Big 12, their strength of schedule ranks at only 53rd in the nation due to a weak out-of-conference schedule coming in to this Saturday’s Big 12-SEC challenge.

Florida comes into this one undefeated at the O’Connell Center, with a 10-0 record on the season. The Gators have won three of their last four, despite dropping their most recent game on the road to Vanderbilt, 60-59. Forward Dorian Finney-Smith has been phenomenal for UF as of late, putting up at least 12 points in each of the Gators’ last seven games, and five double-doubles in that span. Guard KeVaughn Allen has also been an efficient scorer for Florida recently, shooting at least 50 percent in each of his team’s last four games.

The Gators are 4-3 all-time vs. West Virginia, and are 1-0 against the Mountaineers at home. Saturday will mark the first time since 2010 that Florida faces a top-10, non-conference team at the O’Connell Center. That last visit came from Ohio State on November 16, 2010 when the Buckeyes took down the Gators by 18 points, with future NBA big man, Jarred Sullinger, leading the way.

INJURY INFORMATION: Forward Justin Leon is questionable for Saturday’s game with a concussion suffered in the Gators’ most recent contest against the Vanderbilt Commodores. Forward Alex Murphy is still out indefinitely with plantar fasciitis in his right foot.

BROADCAST INFORMATION: The game tips off on Saturday at noon and can be seen live on ESPN with Mark Jones and Kara Lawson on the call. As always, the game can be heard on ESPN Gainesville 95.3, with pre-game coverage starting at 11:25 a.m.