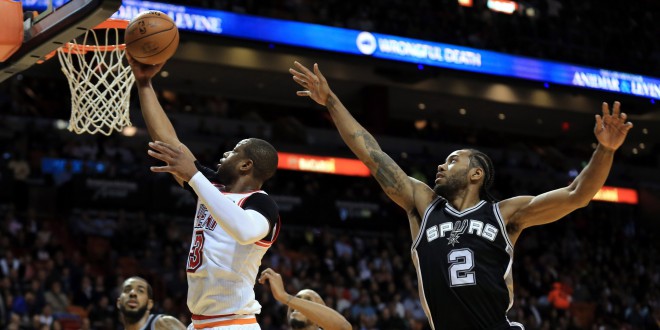 Miami Heat guard Dwyane Wade closed the gap of the score in the third quarter with an 18-foot jumper, giving the Heat a shot to earn a home win. San Antonio’s offense, however, continued to dominate leading to the 119-101 victory Tuesday night at American Airlines Arena.

In the first quarter, the Heat continue to take their lead over the Spurs and Wade’s 19-foot jumper solidified the four-point advantage going into the second. Five minutes before the half San Antonio’s Boris Diaw made a 26-foot three-point jumper, which allowed the Spurs to move past the Heat.

Miami trailed by 15 in the third quarter and the Heat’s Gerald Green’s 17-foot two point shot cut that deficit down to seven points with 9:51 left in the fourth.

The Spurs responded quickly with a three-pointer from Patty Mills and a successful free throw after Hassan Whiteside was assessed a flagrant-2 for elbowing the Spurs’ Boban Marjanovic.

Heat head coach Erik Spoelstra says compared to Miami, the Spurs are playing at another level.

San Antonio’s dynamic duo came through again, helping the team improve to 44-8 this season. The Spurs were led by LaMarcus Aldridge who finished with a game-high 28 points and forward Kawhi Leonard who added 23 points and nine rebounds.

Wade says the Spurs are talented and are worthy of emulation.

Wade scored 20 points on 9 for 12 shooting for Miami. Chris Bosh recorded 18 points of his own and Whiteside added 14 points and six rebounds before getting ejected in the fourth.