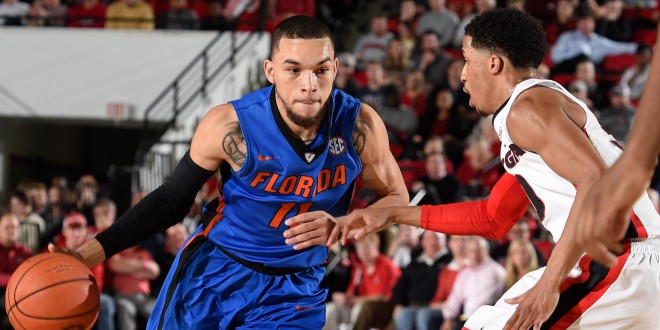 It wasn’t pretty. But it was a win.

The Florida men’s basketball team used timely buckets and grit to escape Athens with a 57-53 win over the Georgia Bulldogs on Tuesday night.

Despite shooting only 36.4 percent from the floor and a 1-for-10 performance from Dorian Finney-Smith, Florida (17-9, 8-5) notched its first road win since January 16th.

KeVaughn Allen nailed a big three-pointer to break a 47-47 tie with 3:30 remaining in the ball game. Kasey Hill stepped up on the next possession, driving into the lane to draw a defender away from John Egbunu, who was wide open for the flush with just over two minutes remaining.

Chris Chiozza, Finney-Smith, and Allen knocked down five of their last six free throws to secure the win.

The Gators overcame some shooting woes before doubling their first-half point total (19) in the second half (38).

Florida was an abysmal 1-for-17 from three-point range in the first-half. The Gators were getting good looks and taking open shots but they could not get the ball in the basket. Justin Leon knocked down a free-throw late in the first-half to ended a scoring drought that lasted over six minutes.

“We’re obviously not the best offensive team, the best shooting team,” said White. “Made some shots down the stretch, made some big plays. Really, really defended at a high level (against a) very good offensive team – executes as well as most teams in the country do in Georgia.”

Allen led the way for Florida with 19 points on 7-for-13 shooting, including 4-for-9 on three-pointers. Egbunu added 10 points, seven rebounds, and five blocks.

Florida was able to stay in the game by limiting the Bulldogs with hard nosed defense. The Gators held forward Yante Maten, Georgia’s leading scorer, to 11 points on 4-for-17 shooting. Georgia starters Kenny Gaines, J.J. Frazier, and Charles Mann combined to shoot just 10-for-32 from the floor.

The win keeps Florida near the top of pack in the SEC standings. The Gators are now tied with South Carolina and Texas A&M for third in standings with a 8-5 record in SEC play. Kentucky and LSU sit atop the standings with a 9-3 conference record.

The Gators will look for back-to-back road wins when they take on South Carolina (21-5, 8-5) at noon on Saturday.