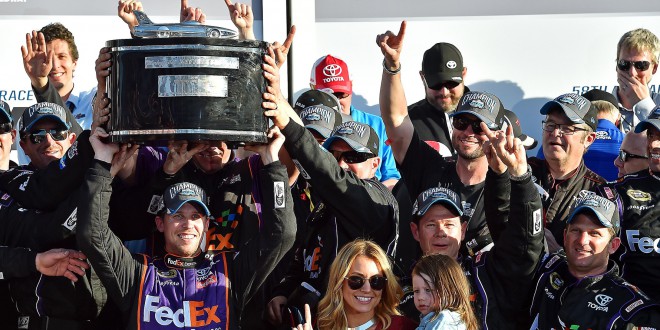 The 58th edition of the Daytona 500 saw one of the most thrilling finishes in the illustrious history of the race. Denny Hamlin came out victorious over Martin Truex Jr. by the smallest of margins, 0.010 seconds to be exact. The “photo finish” indeed marks the closest Daytona 500 finish since 1993, the year that NASCAR introduced electronic scoring.

For Hamlin, it was his first career Daytona 500 victory. It also marks his seventh victory on the Dayton track in all races. Hamlin led for 95 laps, which are the most by a winner of the Daytona 500 since Dale Earnhardt in 1998. Afterwards Hamlin, who wrote a childhood letter predicting his victory, did not hide his emotions admitting that the win was indeed the biggest of his career so far.

Denny Hamlin wrote a childhood essay about winning the Daytona 500.

The trip to victory lane was also hugely important for Joe Gibbs racing, as it is the second time one of their drivers has won the Daytona 500. The previous victory was by Dale Jarrett in 1993.

On the losing side of the thrilling finish was Martin Truex Jr., who knows he won’t be able to forget how close he was to winning for a long time.

Despite the loss, the second-place finish for Truex marks a good start to the year for his single-car team.  Last season, Truex made the Championship 4 and won a race.

Among other notable finishes on Sunday were Dale Earnhardt Jr., who was involved in a wreck on lap 170 and finished in 36th place. Chase Elliott finished 37th in the race, which is the worst finish by a Daytona 500 pole sitter since 2003. Kyle Busch came in third place, which is his best career finish in the Daytona 500.