Over 7,000 fans came to the Stephen C. O’Connell Center to watch the Gator gymnastics team compete in their last home meet of the season on Friday night. The Gators defeated the North Carolina Tar Heels 198.050 to 193.725.  This marks the Gator’s 20th win against the Tar Heels in 21 meetings. The crowd was fired up as senior Bridget Sloane came out with a perfect 10 on her floor routine in her last performance in the O’Dome. Sloane also won the all-around title for the 24th time, which ties her for second in school history.

Sophomore Alex McMurtry also scored a perfect 10 on bars. This was her second 10 on bars this season. Senior Bridgette Caquatto went out in style on her floor routine, matching her season-best with a 9.95. 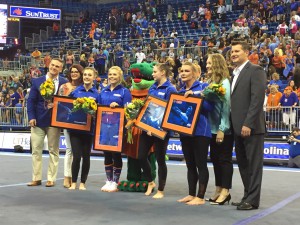 were honored at Senior Night. Bridgette Caquatto, Bianca Dancose-Giambattisto, Morgan Frazier and Bridget Sloane have earned three national championships for the Gators. Sloan says it’s amazing to think that before her class came in, the Gators had never won a national championship. Morgan Frazier added that it was an honor to be a part of this team, even though she has had an ankle injury.

But this season isn’t over yet. The Gators are still looking for their fourth national title as they head into postseason competitions. SEC Championships begin next weekend with NCAA Regionals on April 2 and the NCAA Championships on April 15th. 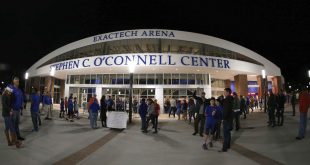