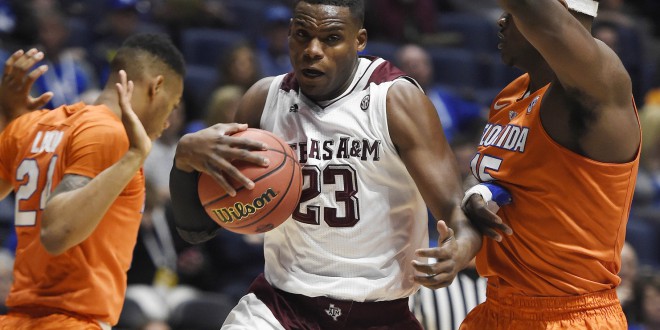 The Florida men’s basketball team allowed 44 points in the paint en route to a 72-66 loss to the Texas A&M Aggies in the SEC Tournament in Nashville on Friday.  The loss could knock UF out of contention for an NCAA Tournament bid.

The Aggies’ 44 points in the paint were the most the Gators have allowed in over five years, as TAMU scored 61% of their points in the interior. Tyler Davis, Danuel House and Jalen Jones all scored in double digits for Texas A&M, putting up 15, 15 and 13 points respectively. Kasey Hill had another stellar SEC Tournament outing, leading the Gators with 18 points on 6 of 11 shooting, while adding three rebounds and two assists. The 18 points matched his season high.

Florida outrebounded Texas A&M 45-43, on the boards, but their 12 turnovers translated into 12 points for the Aggies. Florida coach Mike White praised the Aggies’ defense and summarized the Gators’ struggles in limiting Texas A&M’s paint touches.

The Gators were an abysmal 16% from beyond the arc, going 3 of 19 from downtown. Devin Robinson and Justin Leon combined to go 0-7 from three-point range. The only Florida player with some success from three was KeVaughn Allen, who finished with 10 points on 2 of 5 shooting from downtown. Coach White discussed the Gators’ frustration shooting the basketball.

After Florida took a 4-0 lead to open the game, the Aggies powered their way to a quick 8-0, minute and a half run to take an 8-4 lead after the first four minutes.

The Gators pulled out a 7-0 run of their own to take an 11-8 lead after a thunderous two-handed slam from John Egbunu. Egbunu’s dislocated finger certainly didn’t seem to bother him on the rim rattler.

Offense was abundant in the first half with the two teams reaching 17-15 with 10:54 left. To put that into perspective, it took the Gators and Razorbacks until the 5:57 mark in the first half of Thursday’s game to reach the same total.

Early in the half, 16 of Texas A&M’s first 21 points came in the interior, with the other five coming via free throws.

While Texas A&M didn’t score in the final 2:36 of the first half, they still took a 34-32 lead into halftime. The Aggies scored 26 of their 34 first half points in the paint.

Florida outshot Texas A&M in the first half, 45% to 36%, but both teams were abysmal from long range, combing to go 3 of 19 from long distance.  The Aggies and Gators both finished the first frame with 22 rebounds apiece, but TAMU took the advantage on the offensive glass, grabbing four more offensive boards.

Kasey Hill came out electrified in the second half, scoring six straight points during a 7-0 run for Florida early in the second frame. The Gators took a three-point lead with 12 minutes left in the contest.

With a minute left, Danuel House knocked down a three-pointer for the Aggies, giving them a six point lead. The three pointer knocked out the last remaining wind in the Gator sails, as Texas A&M went on to win 72-66.

Florida will hope for a miraculous NCAA Tournament bid this coming Sunday but with the loss to Texas A&M it might not happen. Coach White following the game praised the strong strength of schedule for the team, and said the team would be happy wherever they end up in the postseason.

Previous PREVIEW: No. 2 Kentucky face No. 10 Alabama in SEC Quarterfinals
Next Gator Gymnastics Earn a Victory on Senior Night