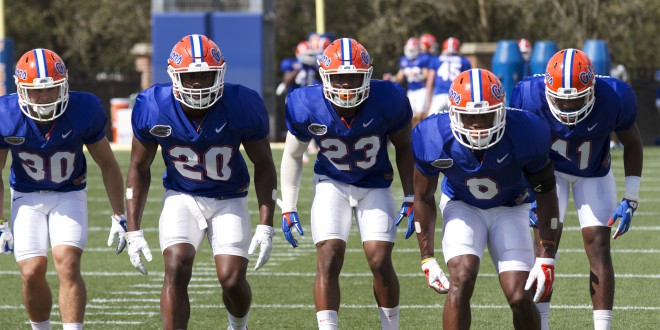 Somewhat lost among the speculation over the quarterback and wide receiver positions is the fact that Florida’s secondary remains one of the team’s biggest strengths.

A main part of that group, red-shirt senior Marcus Maye, is entering his last season with the Gators after deciding not to declare for the draft. The six-foot, 210 pound safety had the best season of his career last year, including being named a first team All-American by USA Today Sports, but he still feels like he has more to offer.

Maye says for him, the decision was all about being able to have one more year to improve both on and off the field.

That involves bouncing back this year from an ugly end to the season last year, including the 41-7 defeat to Michigan in the Citrus Bowl. Maye says the defeat in the bowl game has motivated the team throughout spring practice.

So while the returning players are focused on moving on from last season, spring practice also serves as a first look at the early enrolled freshmen and at the quarterback battle. Maye says he likes what he’s seen so far from the team. 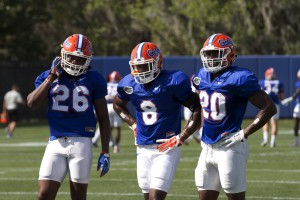 This experience, according to Maye, has been evident so far this spring.

Maye says he likes how Del Rio has been interacting with teammates and that Del Rio has looked comfortable taking the snaps on the practice field. After an end to the season in which the offense failed to provide much help for the defense, this development in the offense has to be good news for Maye and the guys on his side of the ball.

As with any new season, Maye has also been able to get some time in with the new guys who’ll be playing with him on the defense.

Highly touted recruit Chauncey Gardner will be joining Maye in the secondary this season, and he’s gotten a close look at the freshman from Cocoa, Florida in practice.

From what he’s seen this spring, Maye likes Gardner’s aggressiveness and versatility. These attributes should help Gardner fit in well with a secondary that was among the nation’s leaders in takeaways, but that also lost star cornerback Vernon Hargreaves to the NFL Draft.

Gardner isn’t the only freshman receiving praise from Maye, though. He says the freshmen as a whole are coming along “fast”.

With the self proclaimed “DBU” entering another season, the hope is that the freshman can help Maye and star cornerback Jalen Tabor lead the way for a secondary that is part of the core of the Gators defense, on the way to avenging the results from last season. If the Gators can do that, it’ll go a long way in making Maye’s return for his senior season everything that he expected and more.