Champions are Crowned on Sunday at Gatornationals

Brittany Force made her first ever entrance to the winner’s circle on Sunday, edging out Terry McMillen in the Top Fuel competition. Force hit a top speed of 318.77 mph in 3.981 seconds to seal the victory. Force’s first career victory is the first time since 2006 a female racer (Melanie Troxel) has raced to back to back final rounds. Force was in disbelief.

Robert Hight is the Funny Car winner. Hight has been in three final rounds in Gainesville, and now has three wins. The 2009 Funny Car world champion now has the fourth most wins in Funny Car. Both Hight and Force race for John Force Racing, giving the team two wins over the weekend.

Greg Anderson is your Pro Stock winner. Anderson has appeared in six final rounds in Gainesville and now has four wins. Anderson is the first driver in the Electronic Fuel Injection Pro Stock Era. Anderson says there’s no place like Gainesville.

The Strip at Las Vegas Motor Speedway awaits NHRA fans from April 1st through the third. 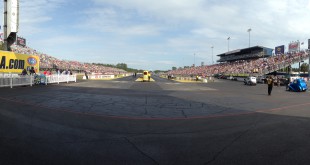 Drivers will have to hold before advancing to the starting line for now. Gatornationals has …