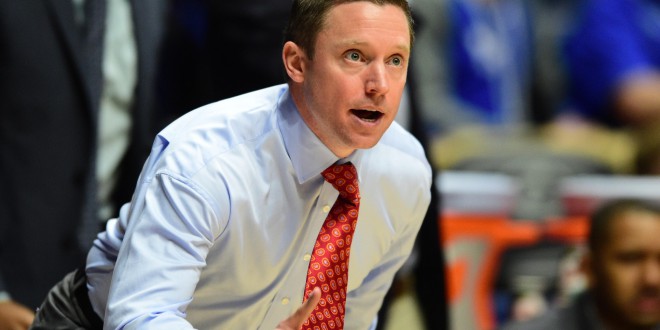 No Egbunu, no problem. The Florida Gators continued their strong play through the first two rounds of the NIT, as UF took down Ohio State, 74-66. Kevarrius Hayes got the start for John Egbunu, who was declared out for the season earlier this week with a torn ligament in his right thumb. Hayes finished with an extremely efficient 14 points on 5-5 shooting from the field. Kasey Hill continued his stellar post-season play, posting 15 points and five assists. Dorian Finney-Smith also finished with his eighth double-double of the season, with a team-leading 16 points and 12 rebounds.

Florida outshot Ohio State, 45 percent -39 percent from the field and 32 percent to 27 percent from three-point range. As they’ve been all season, the Gators were ferocious on the boards, outrebounding the Buckeyes, 43-35 overall and 16-11 on the offensive glass. UF was able to turn Ohio State’s 13 turnovers into 14 points, excelling in transition. And despite not having John Egbunu to anchor the interior, the Gators scored 44 of their 74 points in the paint. The Buckeyes 28 points in the paint simply weren’t enough to keep up with the Gators.

The three days rest the Gators had gotten following their domination of North Florida paid off, as Florida got off to an electric 9-0 run to start the game. Ohio State missed their first five shots from the field.

A 13-6 run by the Buckeyes, would have Florida questioning their own game plan, as Ohio State pulled within a mere five points. Mike White called a timeout immediately after to re-motivate the troops, and close out the first half strong with just under eight minutes remaining.

Whatever Coach White told the Gators clearly didn’t work, as a 9-0 run by the Buckeyes to end the half pulled them within one point of Florida. UF led 31-30 as the two teams made their way into the locker room ready for an energized second half.

Florida didn’t have a double-digit scorer in the first half, but were led by Justin Leon and KeVaughn Allen’s seven points. Marc Loving led the Buckeyes’ as the team’s only double-digit first half scorer, going 5-8 from the floor, good for 12 points.

The Gators had a 20-18 advantage on the boards and grabbed two more offensive rebounds than the Buckeyes. Florida’s stronghold in the interior allowed them to score 20 of their 31 first half points in the paint. Neither team was strong from beyond the arc in the first frame, as each squad went 3-11 from three-point range. Justin Leon suffered a head injury at the end of the first half, but would return in the second half. Leon had previously suffered a concussion earlier in the season that caused him to miss one game.

The Gators opened up the second half on a 10-2 run, to take a 43-32 lead over the Buckeyes to start the second half. Thad Matta called a timeout with 15:46 left in the second half to wipe his brow, and attempt to stop the Gators’ offensive purge.

With just over five minutes left, Florida held a 62-53 lead. The Gators sustained their momentum in the second half, never leading by less than nine points after the 13 minute mark up to that point.

While the Buckeyes closed the game on a 21-16 run, it wouldn’t be enough as the Gators secured a 74-66 victory en route to the third round of the NIT.

Florida’s next contest will come on Wednesday, March 23 vs. the winner of Monmouth/George Washington at either 7 or 9 p.m. The game will once again be on the road, with renovations still going on at the O’Connell Center. With a win in that game, the Gators will advance to the final four of the NIT at Madison Square Garden in New York, New York.