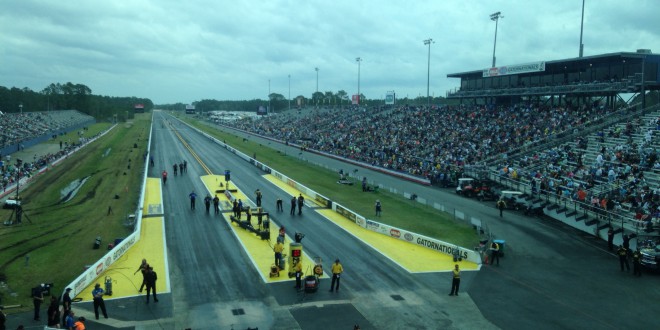 Racers Ride into the Finals on Third Day of NHRA Gatornationals

There were concerns with fans and drivers included with the weather delays Saturday morning at the Gainesville Raceway.  However, racing conditions cleared with sunny skies and temperatures in the low 80’s. Racers used the weather to their advantage in this day of NHRA Gatornationals racing.

Beckman, also known as “Fast Jack” had a 3.879 second run in his Funny Car with a speed of 329.26 miles an hour.  In his Infinite Hero Foundation Dodge Charger R.T. he also set a national record. The California native enjoys the excitement of the Gainesville races.

“I’m always excited to come here because we race two races and take two weeks off. Then we come all the way to the east coast and these folks get to see us for the first time; it’s really like another season opener.”

Crampton, who competed in the Top Fuel category, earned his first top qualifying position in 2016 and his first at the Gainesville Raceway. Crampton, the Australian native raced to a 3.698 second run at 317.42 miles an hour in his Lucas Oil Dragster. On Sunday, he will start his eliminations against Chris Karamesines. Crampton was followed by Clay Millican and Antron Brown in qualifying position.

In Pro Stock, Jason Line was the top qualifier with his Chevy Camaro clocking a run of 208. 84 miles an hour with an ET of 6.584 seconds.  Line, a four time Gatornationals winner, will face the winner of the Shane Gray and Vincent Nobile second round match-up for his first finals run.  Bo Butner and John Gaydosh Jr, also driving Camaros, were the second and third highest qualifiers, respectively.

Sunday will be the final day of the events and races at the Gatornationals, and they are all at the Gainesville raceway. 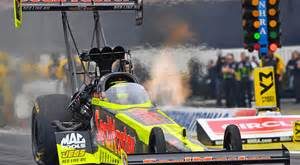