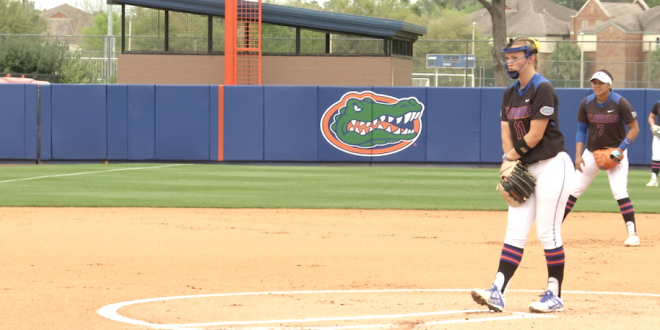 In the second of a three game series Saturday in Gainesville, the top ranked Florida softball team (29-1) clinched their SEC series with a 4-2 win against the visiting Tennessee Volunteers (21-7).

Freshman pitcher Kelly Barnhill is 10-0 on the season after starting in the circle for Florida, and she began the game by striking out the side.

In the bottom of the first, Kelsey Stewart got on first base after a hit to left center. A high pitch helped Stewart steal second and she scored after Kayli Kvistad singled past third base. The bases were then loaded after Janell Wheaton was hit by an Erin Gabriel pitch. While Nicole DeWitt hit a single to score Amanda Lorenz, the Gators ultimately left three runners on base to end the first inning.

After a two-run first inning, DeWitt says attacking early is a key in the Gator success.

To start the second, three Volunteers failed to get on base, ending the first half of the inning quickly. Florida’s second inning wasn’t much different, a defensive stand from Tennessee left Kelsey Stewart on after she stole second. The third inning was business as usual for the Gators, as all three of Tennessee’s batters couldn’t find first base. However, Florida also struggled in the batter’s box – with two consecutive strikeouts to start the third inning.

In the fourth, Tennessee loaded the bases with just one out but Barnhill worked out of the jam by striking out the next two batters to end the inning.

Tennessee finally found some offense in the fifth – with the bases loaded, Megan Geer stepped into the batters’s box and hit a two run single. A pop fly to center ended the Volunteer scoring as they left the bases loaded.   With the score tied 2-2 Tennessee made a pitching change with two outs and two on; Rainey Gaffin walked two straight hitters and the Gators forged a 3-2 lead.

Both teams had four hits entering the sixth inning, and Aleshia Ocasio entered the circle for Florida in the sixth. She started her day with a strikeout, before Florida’s defense retired two batters.

Florida head coach Tim Walton says it helps to have such a talented pitching staff when opposing teams are threatening.

In the sixth, Kelsey Stewart got on first base after an error by Tennessee. Stewart then stole second before Merritt was walked.  A two-out Kvistad single to center field sent Stewart in for the final score, making it 4-2.

The Gators’ defense made quick work of the seventh inning, retiring Tennessee’s first three batters before they could get on base.

The Gators and Volunteers will meet in Gainesville for the final game Sunday at 4 p.m.

I'm a senior studying Political Science at the University of Florida. Multimedia Sports Reporter for ESPN Gainesville 95.3 and WUFT - Passionate about life, sports, and fitness.
@charliejordanuf
Previous No. 2 Florida Lacrosse Falls to Top-Ranked Maryland
Next Racers Ride into the Finals on Third Day of NHRA Gatornationals