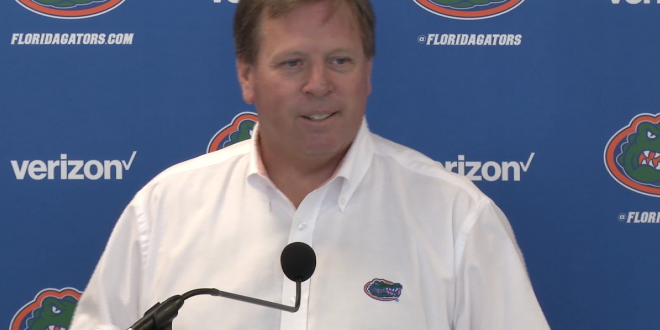 Coach Jim McElwain addresses the media on Monday before practice.

The Florida football team kicked off week three of spring practice today under the Florida sun.

The Gators completed a Saturday practice which head coach Jim McElwain said was the most impressive day for his team yet this Spring.

The offensive line has continued to improve their communication and execution. McElwain said the line is becoming more technically sound.

Today, Alvin Bailey and Jordan Sherit rejoined the team after being sidelined by back and hamstring injuries respectively. Their absence has allowed players such as true freshman WR Dre Massey, and sophomore DL Keivonnis Davis to step up in their absence.

Senior wide receiver Ahmad Fulwood has stepped up as a veteran leader at the position. McElwain said Fulwood’s effort this off-season has been exemplary.

18 former Gators will be put their skills on display in Florida’s pro-day tomorrow. McElwain is excited the by what his former players stand to gain.

McElwain has yet to name a starting quarterback, but says all four competitors (Del Rio, Trask, Appleby, Franks) have had strong outings.

Freshman kicker Eddie Pineiro has drawn attention for his strong leg, and created a buzz by nailing a 58-yard FG earlier this month. McElwain said he’s made it a point to keep the young kicker on his toes on practice.

McElwain also likes the prospects of his team improving facilities, including dorms, the locker room, and coach’s offices.