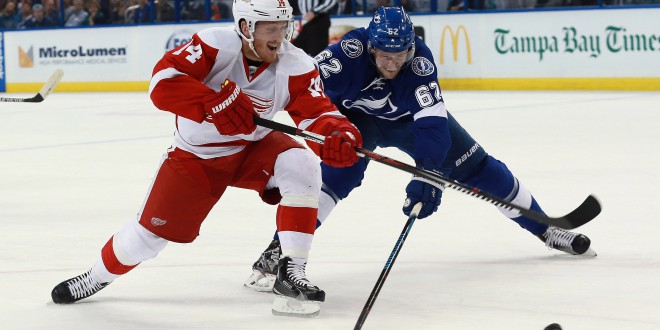 The Tampa Bay Lightning are tied with the Florida Panthers for first place in the Atlantic Division standings after they triumphed over the Detroit Red Wings 6-2 during Tuesday’s match up at Amalie Arena.

With just over a minute into the first period, Tampa right wing Erik Condra ended his 20 game drought with a wristshot goal that was assisted by Ondrej Palat and Brian Boyle.

Condra says it’s important to be ready to contribute, even if you’re in a slump.

The Lightning were up by two goals midway through the first after Vladislav Namestnikov scored off of a rebound shot, sending the puck right through the five hole.

Steven Stamkos scored his 34th goal of the season, 33 seconds into the second period to give the Lightning a 3-0 lead. Red Wings goalie Jimmy Howard was pulled after the goal for Petr Mrazek.

Detroit rallied and finally got on the scoreboard as left wing Justin Abdelkader put one in the net on a power-play goal. The Red Wings scored another quick second period goal from Darren Helm, leaving the Lightning with a one-goal advantage, but Tampa pushed and scored another three goals.

Lightning defenseman Victor Hedman says Tampa’s win is big a deal and the team is happy with the way they played.

Detroit (36-26-11) forechecked effectively and had some success in maintaining possession in the Lightning zone throughout the game. But even when they didn’t have the puck, the Lightning played well defensively. They blocked 14 Detroit shots and, with the exception of the portion in second period when the Red Wings surged, did well limiting their scoring chances. Tampa out-shot Detroit 34-25.

Tampa will host the New York Islanders on Friday.