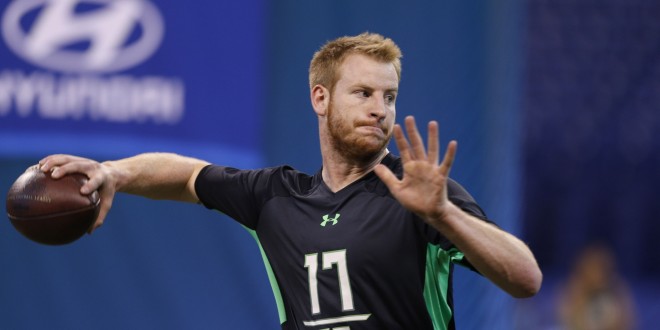 Howie Roseman can’t commit to chocolate or vanilla. He likes both and he’s fine with both.

The Philadelphia Eagles’ executive vice president of football operations spoke on Thursday about the blockbuster trade between his organization and the Cleveland Browns. Now in sudden possession of the No. 2 overall pick of the 2016 NFL draft, the Eagles are primed to take one of the highly touted quarterbacks, and Roseman, who compared the available quarterbacks to the flavors, says it doesn’t matter which one because they’re both unique.

#Eagles have agreed to a trade with the Cleveland Browns to acquire the second-overall pick in the 2016 NFL Draft. pic.twitter.com/SdJSegMy4m

California’s Jared Goff and North Dakota State’s Carson Wentz are expected to be the first two draft picks in some order after the Eagles and St.Louis Rams traded up. Both have their own sets of strengths and Roseman says they couldn’t pass the opportunity to nab one of them. But he did want to make one thing clear—QB Sam Bradford, who signed a two-year, $35 million deal in March, is the team’s starter. The Eagles may need to do more damage control with their supposed starter, because according to NFL reporter Adam Schefter, he’s not pleased.

It’s only natural, but those who have spoken to Sam Bradford say he is not happy with today’s trade.

It’s hard to blame Bradford. He finished a solid season for the 7-9 Eagles, throwing 3,725 yards with 19 touchdowns and 14 interceptions. The pressure is on him to exceed those expectations in the upcoming season. Even if he does, he might become trade bait, allowing Philadelphia to recoup some of their lost draft picks.

Now the Eagles wait to see what the Rams do with the No. 1 overall pick. CBSSports.com NFL columnist Pete Prisco believes Goff gets drafted first, then Wentz. Wentz, who helped NDSU win its fifth straight FCS championship, broke a bone in his wrist in the sixth game of the year. He returned for the championship game, passing for a touchdown and rushing for two more. Reporters asked Roseman about any apprehension about possibly drafting an FCS quarterback, but he showed none.

While much of the spotlight has been on the Eagles and what their future looks like, the Browns have a lot to gain. Even though they’ll no longer be in the race for Wentz or Goff, NFL draft analyst Lance Zierlein believes they’re in the running for Memphis Tigers QB Paxton Lynch, who might have the highest upside of the first three quarterbacks. Cleveland signed Robert Griffin III to a two-year, $15 million deal in March. Zierlein says he’ll still be the guy this season, regardless of whether the Browns draft a QB. The team is looking to bounce back from a 3-13 season in the AFC North.

The first round of the NFL draft is on April 28. The remaining six rounds of the draft are on April 29-30.