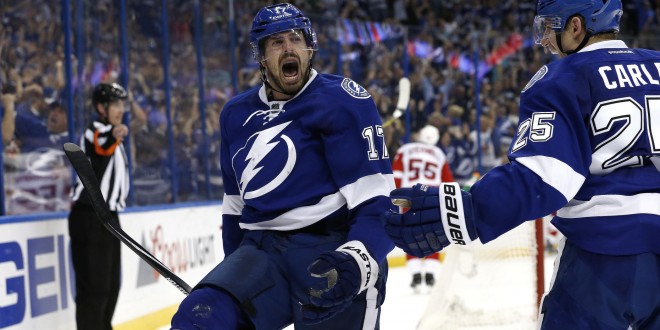 Lightning Advance to Conference Semis After 1-0 Victory Over Detroit

A battle of the goalies came to an end when Alex Killorn scored the game-winning goal with just 1:43 left in regulation. That goal was the only goal scored in Game 5 and would be enough for the Lightning to take down the Detroit Red Wings 1-0 and advance to the second round of the Stanley Cup Playoffs.

#BoltsNation Goal of the Game: Series-clinching Killer. Also, that pass from Cally though?! ⚡️ #TBLvsDEThttps://t.co/KNNYpwN4TH

Wings’ goalie Peter Mrazek had made 23 saves on 23 shots before letting in his one and only goal of the game. Unfortunately, Mrazek’s near perfect performance, which earned him the second star of the game wouldn’t be enough as the Detroit netminder stopped 23 of 24 pucks shot his way. Lightning goalie Ben Bishop completed the shutout, earning the game’s first star stopping all 34 shots sent his way. The stellar performance was the fourth shutout of the young goalie’s career.

Bishop save on Larkin breakaway pic.twitter.com/Jv4tAqCYba

With 1:46 left in the third period, Peter Mrazek went behind his net to clear the puck. While Mrazek is one of the quicker goalies in the league, his clear went directly into the stick of Ryan Callahan. Callahan, noticing that Mrazek was still behind the net, fed a perfect saucer pass to Alex Killorn who banged in the backhand for the team’s only goal. Mrazek’s one mistake of the game was big enough to cost the Red Wings the game and the series.

The Lightning will take on the winner of the Panthers-Islanders series. That series is tied up at 2-2, with Game 5 taking place on Friday night at 8 p.m. in Sunrise, Florida. Roberto Luongo and Thomas Greiss are the expected netminders for the two teams on Friday night.