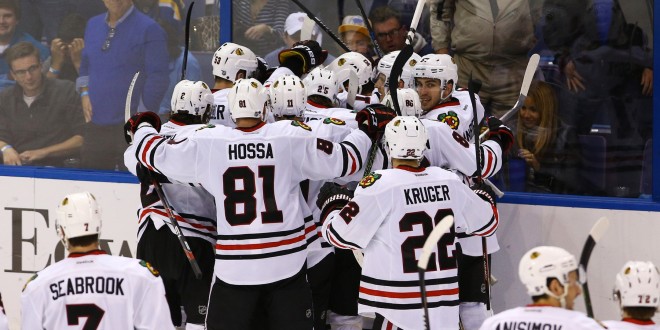 Apr 21, 2016; St. Louis, MO, USA; Members of the Chicago Blackhawks celebrate after defeating the St. Louis Blues during the second overtime period in game five of the first round of the 2016 Stanley Cup Playoffs at Scottrade Center. The Blackhawks won the game 4-3 in double overtime. Mandatory Credit: Billy Hurst-USA TODAY Sports

Thursday night featured a nice slate of games as the Penguins dominated the Rangers, the Ducks took down the Predators, the Lightning escaped past the Red Wings and the Blackhawks pulled out a narrow OT win vs. the Blues.

The Penguins took a 3-1 lead in their series against the Rangers as Pittsburgh shutout New York, 5-0, behind Evgeni Malkin’s stellar performance. Malkin finished with two goals as the Penguins dominated the blue shirts in the offensive zone. Pittsburgh scored their first four goals on only 18 shots, as Rangers’ goalie Henrik Lundqvist was pulled in the early second period. King Henrik, who had let in only five goals in the team’s past three games, had an unusually poor playoff performance on Thursday night. Eric Fehr, Patric Hornqvist and Conor Sheary scored the Penguins’ other three goals. Pittsburgh also finished the game 3-6 on the power play. Game 5 of that series takes place at 3 p.m. on Sunday at Madison Square Garden and can be seen on NBC as the Rangers try and avoid elimination.

After falling down 2-0 in the series, the Anaheim Ducks have won their last two games to tie up their series with the Nashville Predators, 2-2. The Ducks took down the Predators 4-1 on Thursday night as Anaheim goalie Frederik Anderson stopped 30 of 31 pucks shot his way. Nashville center Mike Fisher tied the game up at 1-1 with 8:34 left in the second period. After that, it was all Anaheim as the Ducks scored three straight goals coming from Nate Thompson, Jamie McGinn and Andrew Cogliano. Pekka Rinne, the Predators’ all-star goalie, had his worst performance so far of the 2015-2016 Stanley Cup playoffs letting in a post-season high four goals. Game 5 heads back to California on Saturday evening as the Preds face off against the Ducks at 6 p.m. on NBC Sports Network.

The Lightning became the first team to advance to the second-round of the 2015-2016 Stanley Cup Playoffs as Tampa Bay took down Detroit, 1-0. Both goalies were stellar in this one, but it was Ben Bishop who earned the shutout with 34 saves on 34 shots. Peter Mrazek was near perfect as well, but let in the lone goal of the game after failing to effectively clear the puck from behind his net with under two minutes remaining in regulation. The clear went directly into the stick of Ryan Callahan who flipped a perfect pass to Alex Killorn for the game-winner. The goal was the third of the playoffs for Killorn. The Lightning will get a breather before taking on the winner of the Panthers-Islanders series. That series is tied at 2-2, with Game 5 in Sunrise, Florida on Friday night at 8 p.m.

Thursday night’s Blackhawks-Blues game was easily the most exciting match-up of the night. The two teams remained tied through three regulation periods of hockey and one overtime period. In  the second overtime Patrick Kane decided enough was enough, as the Hart Memorial Trophy winner hit his first shot off the right pad of Blues’ goalie Brian Elliot before circling around the net to rebound his initial attempt for the game-winning goal. Kane was one of four different Blackhawks players to score Thursday night, including Artem Anisimov, Marian Hossa and Artemi Panarin, the bread man. Kane’s game-winner kept the Blackhawks alive as the Blues had a 3-1 series lead coming into the night. While Chicago did win in the second overtime, they blew a 3-1 lead in the third period giving up goals to Robby Fabbri and USA Olympic vet David Backes. Chicago goalie Corey Crawford made 43 saves on 46 shots while Brian Elliot stopped 31 of 35 pucks sent his way. Game 6 of that series will be on Saturday at 8 p.m. in Chicago and can be seen on NBC.

Friday’s slate of games features four different, but interesting matchups. The Philadelphia Flyers try and keep their season alive, as they face off against the Capitals in Washington in Game 5 on NBC Sports Network at 7 p.m. Philly is down 3-1 and has been outscored in the series, 13-4. At 8 p.m. on CNBC, the Panthers and Islanders square off in Game 5 of their series in Sunrise, FL. That one is tied up at 2-2, with only one game so far being decided by more than one goal. The Western Conference’s slate of games start at 9:30 pm. as the Wild take on the Stars in Dallas. Minnesota trails 3-1 in the series and will be eliminated if they lose on Friday night. The last game of the night features Game 5 of the Kings-Sharks series. San Jose leads that one 3-1 and will look to close out Los Angeles at the Staples Center at 10:30 p.m. on CNBC. The Sharks have not advanced to the second round of the playoffs since 2012-2013 and are looking for their first playoff series victory over the Kings since the 2011-2012 season when they went all the way to the conference finals before falling to the Blackhawks in four straight games.

Previous Lightning Advance to Conference Semis After 1-0 Victory Over Detroit
Next Ozuna, Koehler lead Marlins to 5-1 Victory Over Nationals