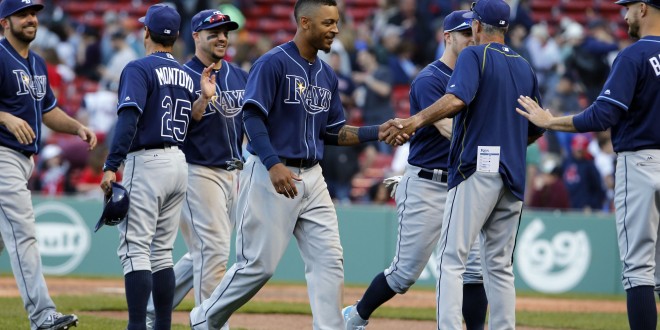 The hot bats of the Rays torched former teammate David Price on his first start against them as a division rival.

But the Red Sox were the ones who got out of the gate early, scoring five runs in the first inning. Dustin Pedroia hit his first home run of the season with a two-run blast over the fabled green monster. Things got worse for Rays’ starter Jake Odorizzi, as the defense also played a part in digging the first inning hole. Catcher Curt Casali attempted to gun down a stealing Brock Holt at second base but his throw went wild, scoring Travis Shaw who was on third base.

Unfazed, Tampa Bay began to chip away the deficit with Evan Longoria’s solo blast in the top of the third.

In the fourth inning the Rays lineup exploded with a six run showing. Former Vanderbilt Commodores clashed when Casali took David Price yard on a two-run homer, his third career home run off the fellow alum. Later in the inning, Evan Longoria doubled in two runs. Then Desmond Jennings returned the favor by doubling in Longoria, knocking David Price out of the game.

The 2012 Cy Young winner finished the day with 8 earned runs off of eight hits in 3.3 innings of work.

Boston stayed within striking distance by taking advantage of the Rays bullpen. Mookie Betts’ two-run home run in the sixth turned the contest into a one-run game before Travis Shaw doubled in David Ortiz in the seventh to tie the game up at 8-8.

Steven Souza Jr. knocked in the go-ahead run in the eighth with a two-out double off the green monster scoring Desmond Jennings to put the Rays up 9-8.

Insurance runs came in the top of the ninth by way of a Forsythe single scoring Kiermaier, and a two-run Dickerson double to reach the final score of 12-8.

Tampa Bay went into Boston riding a wave of momentum after winning their first series of the season, and now have strung together back-to-back series wins. The Rays (7-8) finish their road trip with a three-game series against the Yankees.

Originally from Ocala, Florida. University of Florida Class of 2017. Avid FIFA player willing to beat anybody. Follow me on Twitter for everything you need to know!
@JoshLaSelva
Previous Ozuna, Koehler lead Marlins to 5-1 Victory Over Nationals
Next Jake Arrieta No-Hits Reds in Historic Performance