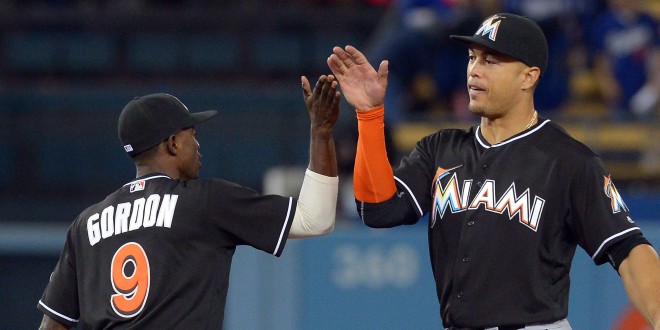 His reaction said it all.

The moment Giancarlo Stanton made contact with a 1-0 fastball from Clayton Kershaw in the sixth inning, Kershaw turned around, dropped to a knee and looked at the ground before following the flight of the ball. Kershaw knew the end result as soon the ball hit the bat.

Stanton’s three-run, 433-foot blast in the sixth inning put the Marlins ahead for good, giving them a 5-3 lead as part of five-run sixth inning. The Marlins tacked on another run in the eighth inning to make it 6-3, the final score in a game that marks the Marlins’ third straight road win.

Big G with the big hit off Kershaw as we beat LA, 6-3, last night!https://t.co/EsIwPsDleY

The game didn’t start out as well as it ended for the Marlins though.

The Dodgers struck first, scoring two runs in the first inning. Kershaw then added an RBI double in the fourth to give Los Angeles a 3-0 lead. Meanwhile, Kershaw, who ended the game with 10 strikeouts, held Miami scoreless through five innings with a typically strong pitching performance.

And then the sixth inning came.

Miami made it a one-run game via RBI hits from Martin Prado and Christian Yelich, as part of a string of five straight hits off of Kershaw.

The stage was then set for Stanton, who delivered with his sixth home run of the season. Stanton says that in a game where Kershaw was pitching well, it was big to have a quick turnaround like they did in the sixth.

AJ Ramos went on to close out the game, recording his fifth save of the season, while starting pitcher Tom Koehler picked up his second win of the season.

Miami will take on L.A. tonight for the third game of the four-game series, with Justin Nicolino on the mound for the Marlins, and Scott Kazmir pitching for the Dodgers.