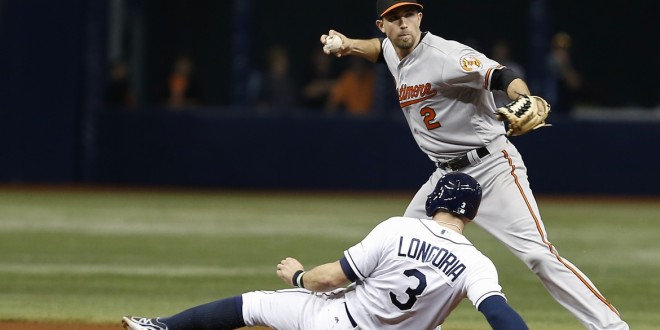 The Tampa Bay Rays (10-11) blew the chance to sweep their first series this season. After defeating the Baltimore Orioles (12-8) in the first two games of the series, the Rays fell 3-1 in the final game of the series Wednesday night.

Despite out-hitting the Orioles 4-3 on Wednesday, a three-run homer from Baltimore outfielder Joey Rickard was too much for the Rays to overcome.  After four scoreless innings, Rickard stepped up to bat in the top of the fifth—with outfielder Nolan Reimold on third base and infielder Jonathan Schoop on first—and hit a home run into the left stands to give the Orioles a 3-0 lead.

.@JRickard35 launched this one into the seats to put the #Orioles on top! https://t.co/u3tctYkAEV #Birdland pic.twitter.com/5NGU25cc8Q

Tampa Bay was able to score a run in the bottom of the ninth, but that was the closest the Rays got to mounting a comeback, and the Rays ending up falling 3-1 to the Orioles.

One of the lone highlights for the Rays was a diving catch by outfielder Steven Souza, Jr. in the top of the fourth to line out the Orioles’ Chris Davis.

The Rays will be back in action on Friday versus the Blue Jays.

Junior telecommunication student at the University of Florida. Passionate about all things related to sports.
@@EllenBazley
Previous NBA Playoff Update: Warriors, Hornets and Rip City Victorious
Next Miami Heat on the Brink of Post Season Elimination

The shortened MLB regular season is coming to an end, and the playoff picture is …