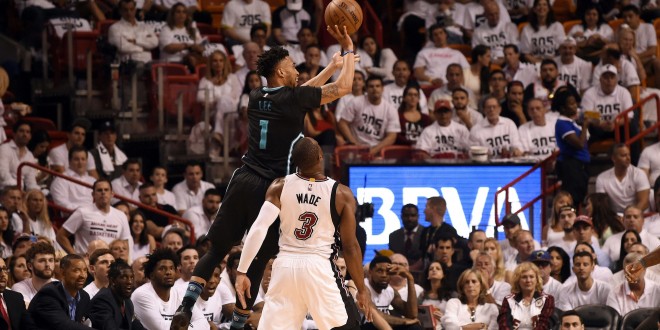 harlotte Hornets guard Courtney Lee (1) shoots as Miami Heat guard Dwyane Wade (3) looks on during the second half in game five of the first round of the NBA Playoffs at American Airlines Arena.

Miami Heat on the Brink of Post Season Elimination

The Miami Heat fell to the Charlotte Hornets 90-88 Wednesday night giving Charlotte the series lead 3-2.  The two point loss  makes it three straight losses for the Heat against Charlotte after they started the post season with a 2-0 lead.

Although  Miami’s recent performance has the team looking like they might not make it out of the first round, the team is shooting 50 percent or better in the final two minutes.

Late in the fourth quarter  Charlotte was down seven points, the Hornets rallied and a game winning three pointer by Courtney Lee in the final thirty seconds sealed the win for Charlotte.

The heat have lost seven of their past nine games including this post season, Miami Heat head coach Erik Spoelstra know’s this is the time in the season it gets real.

Some critics have put the blame on Heat veteran Dwyane Wade in his less then stellar performance in the post season, but some say it’s on the teams choice to keep Chris Bosh on the sideline since February 2 due to Bosh’s blood clots. But Wade feels their opponent capitalized on their weaknesses Wednesday.

The Heat are one game away from being knocked out of the first round if they cant force a Game 7. Charlotte now has home court advantage for Game 6 and the Heat know they are going to have to up their level of play against a Hornets team who hasn’t seen any playoff success in 14 years.