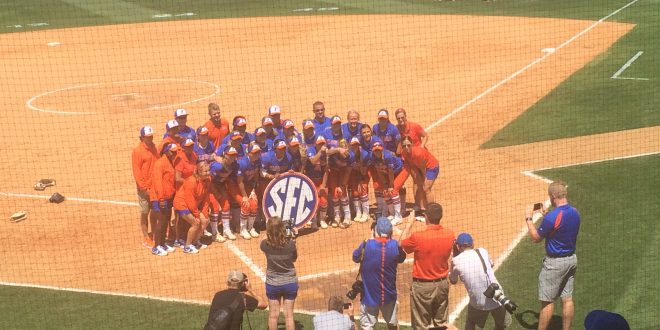 Freshman pitcher Kelly Barnhill started in the circle for Florida and earned her first career no hitter while improving her record to 15-0. Arkansas’ pitcher Grace Moll fell to 12-31 on the season, giving up eight runs off of six hits.

After walking the first Razorback at bat, Barnhill recovered with three consecutive strikeouts to end the top of the first.

In the bottom of the first, Kelsey Stewart walked before an Amanda Lorenz single to left field. An error at third following a Kvistad single scored Stewart and put Florida on the board. Lorenz ran in a second score after Kirsti Merritt singled to center field. Kvistad scored directly after due to an errant pitch from Moll. Merritt was then sent home after Taylore Fuller hit a deep sacrifice fly to left field. Florida ended the first inning leading 4-0.

In the bottom of the second, Florida played some small ball and loaded the corners before Justine McLean scored Kvistad with a single.

In the third and fourth, Barnhill struck out three more batters and the Gators’ defense handled the rest. Florida’s offense stumbled in the third inning as the Gators failed to get on base. In the bottom of the fourth, Florida left two runners on.

Barnhill continued her dominant pitching streak in the top of the fifth, striking out two Razorbacks before Florida’s defense retired the third.

Florida’s bases were loaded in the fifth inning before Alex Voss and Janell Wheaton were sent home by way of a Lorenz single. Florida ended the game via the fifth inning mercy rule when Aleshia Ocasio’s walk off single to center field sent in the final run of the day.

Head coach Tim Walton says this team is special because they understand the formula for success.

The Gator softball team ended the year with 27 shutouts and now they look forward to the SEC tournament. The Orange and Blue will be in Mississippi this Thursday at 4 pm eastern time playing the winner of Wednesday’s match up between Ole Miss and Georgia.