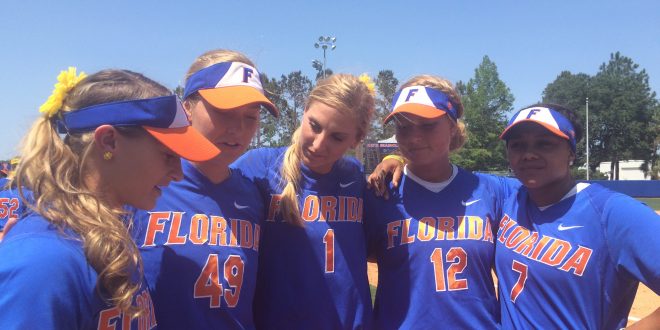 On a day filled with emotion, the top-ranked Florida Gator softball team (51-4) defeated the Arkansas Razorbacks (17-38) 5-0 to clinch the series versus the Razorbacks. Saturday served as Senior Day for the team in which five Gator seniors; Kelsey Stewart, Aubree Munro, Taylore Fuller, Taylor Schwarz and Kirsti Merritt were honored prior to the game.

What a special group. pic.twitter.com/hy7K9tFCou

Saturday’s contest started off quiet before the Gators took off in the third inning. Stewart and Amanda Lorenz scored back to back runs off an RBI from Kayli Kvistad to put the Gators up 2-0. Stewart’s run was extra special as it set a program record for most runs scored by a single player. Stewart broke Gator alum Aja Paculba’s record of 253 runs scored.

With the score at 2-0 in the bottom of the third, Merritt stepped up to bat and smashed a two-run homer to extend the Gator lead to 4-0. It was Merritt’s second home run in two days after she hit one Friday night against the Razorbacks.

Merritt said it felt great to hit the home run on Senior Day.

After consecutive scoreless innings, the Gators capped off Senior Day with a run from Nicole DeWitt in the bottom of the sixth, and Florida defeated Arkansas 5-0. 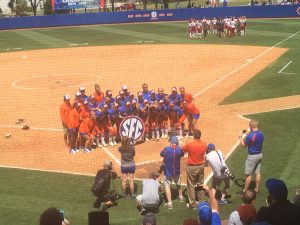 Following the game, all five of Florida’s seniors reflected on the day. Merritt said the day was very emotional. Schwarz said it was cool that all their families were present at the game. Munro said Saturday showed how special the seniors are. Fuller said the seniors finally let it sink in on Saturday that they are seniors. Stewart said the day was very fitting. The five are 224-32 (fourth best in school history), have won at least 50 games in each of their four seasons and are 2014 and 2015 national champions.

Though all eyes may have been on Florida’s seniors, pitcher Delanie Gourley had herself a career day on Saturday. Gourley struck out a career-high 16 batters while giving up just two hits and no runs. Gator head coach Tim Walton said Gourley did a good job of being able to command all the pitches during the game.

The Gators will go for the sweep against the Razorbacks at 1:00 p.m. on Sunday. Sunday’s game will be Florida’s final regular season home game.