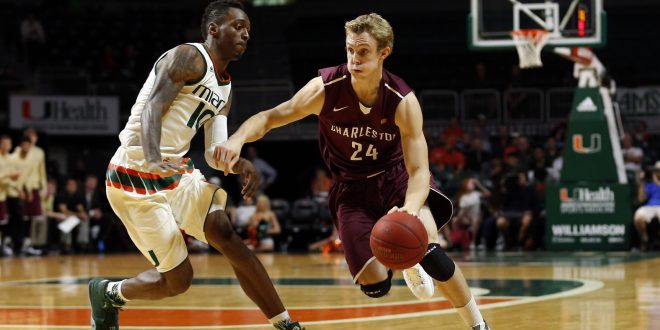 This offseason has had its ups and downs for Florida head basketball coach Mike White. Gorjak Gak, a four-star center from Bradenton, signed with the Florida Gators after getting out of his letter of intent to Oklahoma State. DeVon Walker and Brandone Francis Ramirez are both leaving the program for other schools. So, what is the next step for the Gators this offseason? The answer is the addition of graduate transfer Canyon Barry.

According to ESPN, Barry is the top-rated graduate transfer out of the College of Charleston. He averaged 19.7 points per game before suffering a season ending shoulder injury this past season. He also just so happens to be the son of NBA Hall of Famer Rick Barry. The Golden State Warrior legend believes his son will fit in perfectly into Mike White’s offense.

There are many aspects to the game of basketball that Canyon has learned from his dad. The one that flashes the most is the fact that Rick taught his son to shoot his free throws underhanded. Canyon has received funny looks over his college career just like his dad did back in the 70s. Though, Rick is adamant that however you shoot free throws it has to be above 80 percent.

Mike White still has a ways to go to fully implement his offense in this Gator program. If you put Louisiana Tech’s and Florida’s tape side by side, the Bulldogs are much faster. Luckily for White, Barry has proven that he thrives in transition and could make open jumpers. The perfect combo for White’s offense. Rick believes his son is a perfect match because of his unique ability to react on the fly.

Barry will be joining Gak, recruits Eric Hester and Dantay Bassett as the new additions to the 2016-2017 squad. There is still one spot available on the roster for another scholarship athlete.