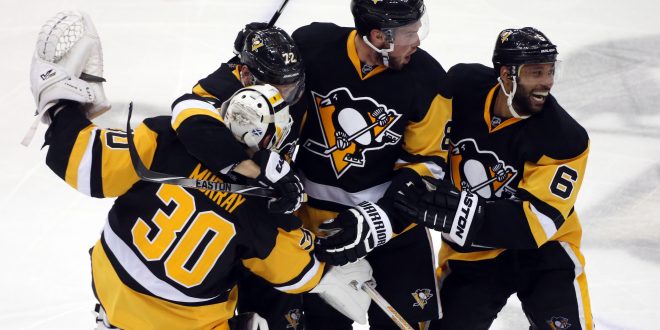 May 10, 2016; Pittsburgh, PA, USA; Pittsburgh Penguins goalie Matt Murray (30) and right wing Patric Hornqvist (72) and defenseman Brian Dumoulin (8) and defenseman Trevor Daley (6) celebrate their overtime win against the Washington Capitals in game six of the second round of the 2016 Stanley Cup Playoffs at the CONSOL Energy Center. The Pens won 4-3 in overtime to win the series 4 games to 2. Mandatory Credit: Charles LeClaire-USA TODAY Sports

The conference finals for the Stanley Cup playoffs start Friday for the Pittsburgh Penguins and the Tampa Bay Lightning. The Penguins are coming off of an overtime win against the Washington Capitals on Tuesday in Game 6 by the score of 4-3. With their series against the Capitals, half of the games went to overtime. For Tampa Bay, they defeated the New York Islanders 0-4 this past Sunday for round two of the NHL Playoffs.

Pittsburgh is an offensive team with a lot of speed and skill that averages 3.36 goals per game. However penalties almost cost the Penguins game 6. For head coach for the Penguins, Mike Sullivan feels that as long as they are scoring, then that is their priority.

When you go to hug the nearest person and it happens to be your coaches… Awkward.https://t.co/bUM45SbaDh

Tampa Bay has two key players missing in centre Steven Stamkos and defenseman Anton Stralman however, Stralman practiced for the first time since March on Wednesday. Stralman is recovering from a broken left tibia but it is not clear if he will play Friday. Minor penalties also are a problem for the Lightning having 59, which is the most among playoff teams.

Game 1 of the NHL Stanley Cup Conference finals will be at the Consol Energy Center in Pittsburgh starting at 8 p.m. and you can hear all of the action on ESPN Gainesville 95.3 FM.